Song of the South: Duane Allman and the Rise of The Allman Brothers Band

By DOUG COLLETTE
October 18, 2013
Sign in to view read count 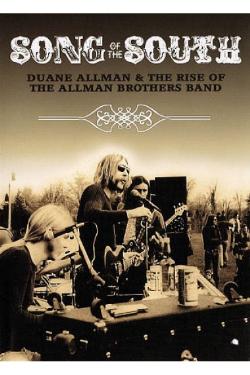 Song of the South: Duane Allman and The Rise of The Allman Brothers Band
Chrome Dreams
2013

Song of the South: Duane Allman and The Rise of The Allman Brothers Band emphasizes the cultural impact of this iconic group and its late lamented leader. Even more so than the biography of the guitarist, Skydog, or the unauthorized story of the group, Midnight Riders (the respective authors of which, Randy Poe and Scott Freeman, appear extensively during the course of the two-hour DVD), this video balances the groundbreaking influence of ABB as role models for a new Southern America almost as much as the template they created as musicians.

Whether watched as intro to the main content or as coda, the bonus features here provide focused backstories on the Allman Brothers that mirrors the main body of the title. Road manager Willie Perkins provides good humored and largely objective insight into the group dynamic as individuals, while Ron and Howard Albert's interviews more than amply imply the continuity between the original six-man lineup and the music it made. Kudos to the producers for giving due credit to producer Tom Dowd, now deceased, who played such an instrumental role in the recording activities of early Allmans and by extension, Eric Clapton's greatest work, Layla (Polydor,1970), the catalyst for which was Duane Allman.

As the chronological history of Duane and brother Gregg Allman's musical evolution unfolds, it becomes clear that while the eventual crystallization of the Brothers as a band was not the first American homage to blues, R&B and soul music—that credit should probably go to The Paul Butterfield Blues Band—ABB stands as the missing link between that group and the various units from Great Britain, including the Rolling Stones and the Yardbirds, that brought the elemental sounds of these genres to the ears of an ever-widening mainstream demographic in the United States.

Vague traces of the now recognizable ABB style are readily apparent in their earliest recordings. Similarly, the individuals who became part of the eventual Capricorn Records scene of the Allman Brothers' heyday fall into the slipstream of the siblings' progression: Paul Hornsby and Johnny Sandlin played along side the men they would eventually help record and nurture, both of whom speak in near-reverential tones about the personalities and professional demeanor of the two: it's an almost palpable tone of awe the pair made it as far as they did given their steadfast approach to their chosen style of music, given how contrary it was to the starmaker machine of the West Coast recording industry.

And that's not to mention how the Allmans' loyalty to roots had no place in the pop world of the time (though it was beginning to open up when the two first hit California in 1967) or the culture at large. Yet The Rise of the Allman Brothers Band posits the argument the South became a corollary to the free-spirited West Coast axis of which the northern cognoscenti centered on New York City wanted no part (see Andy Warhol, Nico, Velvet Underground et al).

Apocrypha and psychology creep into the latter dissertations of writers Freeman and Poe, at which point mythmaking begins to somewhat overshadow the story line. Yet here's an instance where 20/20 hindsight is invaluable: ABB were even running contrary to a burgeoning alternative audience that had arisen out of the broad experimentalism of the late Sixties, an attitude that suited Duane Allman's innate sense of self so deeply, it transferred directly to the musicians he brought into his band as it evolved past a solo projected spearheaded by Dixie entrepreneur Phil Walden.

The inclusion of performance footage of the Allman Brothers Band points up the absence of participation from band members, interview-wise or otherwise, during the course of this DVD. Nevertheless, there are more than a few memorable bits here: literal revelation of the source of the opening riff to "Layla," based on Albert King's "As The Years Go Passing By," may be trivia by definition, but significant in the overall context of Duane Allman's tale. The same is true of the germination of the one original tune credited to Allman, the acoustic duet from Eat A Peach (Capricorn, 1972), "Little Martha;" its provincial reference, in addition to the connection with his own hero Jimi Hendrix, is something of a microcosm of the varied themes weaving through Song of the South.

In addition, Perkins' recounting of the surviving fivesome of the Brothers playing at their deceased leader's funeral brings him to the verge of tears, but it's a moment of honest, tender remembrance, not sentimentality. Likewise, writer Bud Scoppa's descriptions of the sensation of witnessing the original Allman Brothers play live combines his passion for music and his intellectual acuity. Most thought- provoking of all perhaps, is the recounting of Jaimoe's introduction of jazz to the band in the form of Miles Davis and other stalwarts of this music: contemplating an ABB steeped in this largely improvisational form generates more than a few what-if scenarios about the progression of the band had its founder lived.

Given the heavy emphasis on Duane and Gregg Allman's formative days, Song of the South also does justice to the fledgling period of The Allmans proper as they rose inexorably to fame on the strength of their live performances, buttressed by the release of their now seminal concert recording At Fillmore East (Capricorn, 1971). ABB's own historical DVD, Please Call Home (Bright Blue Sky Productions, 2009) works fairly well as a complement to this piece: there's just enough overlap in terms of chronology, subject matter and tone. Still, The Allman Brothers Band deserves a comprehensive and objective history given their impact not just on the area from which they came and thrived, but beyond their geographical home.

References to weblogs for the various contributors and interviewees will astutely guide the curious viewers to research in greater detail such history, while simultaneously providing the aficionado a handy summary by which to refresh the memory and clarify fact vs. fiction. While much of the information and insight on Song of the South: Duane Allman and the Rise of The Allman Brothers Band carries over from previously publications, it successfully expands upon and deepens an understanding of the reach and the grasp of one of contemporary rock's greatest instrumentalists and idiosyncratic personalities.