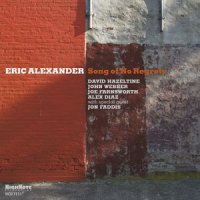 On Song of No Regrets, tenor saxophonist Eric Alexander decides to keep things fresh with a Latin beat and a couple unexpected guests. Having worked so prolifically for so long (he's got more than 160 recordings to his name both solo and as a sideman), it's inevitable that Alexander would have more than a few preferred musicians to round out his rhythm section. Rather than sticking with Harold Mabern, who has been his pianist of choice during eight of his quartet sessions in the past decade, he recruits another longtime collaborator in pianist David Hazeltine. Hazeltine has worked with him as far back as 1997 as part of the contemporary post-bop supergroup One for All.

Rounding out the quartet is bassist John Webber and drummer Joe Farnsworth; both familiar faces. But Song of No Regrets becomes truly interesting when the group expands to a sextet. Dominican- born percussionist Alex Diaz and predominantly high- pitched trumpeter Jon Faddis add an entirely new dynamic. Diaz lays a Latin groove over the entirety of the album, giving it a unique sound without straying too far from what listeners expect from Alexander.

The album opens with the two tracks Faddis received guest billing for; the swinging Hazeltine original, "But Here's the Thing" and an absolutely standout, moody rendition of Stevie Wonder's "These Three Words," in which his trumpet briefly steals the limelight. Alexander's self- written song "Grinder" is just inventive enough to keep your interest as well as the trance-like "Corazon Perdido." Hazeltine plays beautifully over a Latin groove on "Mas Que Nada," an otherwise forgettable track written by Jorge Ben Jor but made famous by Sergio Mendes, before sliding into another Alexander original, "Boom Zoom."

The final leg of the album consists of the title song, which is an effusive interpretation of another Sergio Mendes tune and the second true standout of the session. Lastly are "Cede's Shack" and "Up, Up and Away," both warm and lively but otherwise unmemorable tunes.

At a beat over 55 minutes, Song of No Regrets is a well rounded offering that doesn't run the risk of out-staying its welcome and becoming tedious. However, once Faddis and his trumpet exit, the rest of the album has just a bit less to offer. It's certainly an enjoyable romp, and Alexander is clearly a talented tenor, admirably keeping traditional hard bop interesting in the 21st century. But it stops somewhat short of being must- have jazz, falling into the category of comfortable rather than remarkable.

But Here’s the Thing; These Three Words; Grinder; Mas Que Nada; Boom Zoom; Song of No Regrets; Cede’s Shack; Up, Up and Away.