By CELESTE SUNDERLAND
October 20, 2004
Sign in to view read count 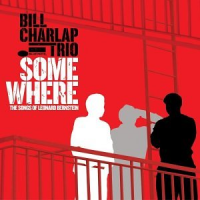 This month Brooke Shields steps into the starring role of Broadway's Tony-Award winning Wonderful Town revival; 25 of Leonard Bernstein's Young People's Concerts with the New York Philharmonic are available on DVD; and radio listeners will have the pleasure of hearing an eleven-part documentary on the maestro's life and career, narrated by Susan Sarandon. Fourteen years after his death, his fans are just as devoted to the immensely loved composer/conductor/pianist as ever and they won't want to miss Somewhere , pianist Bill Charlap's interpretation of twelve Bernstein tunes.

Charlap and his trio, rounded out by Peter Washington on bass and Kenny Washington on drums, play songs from West Side Story, Wonderful Town , On The Town , Candide and Fancy Free with cool finesse. Shot up with a stroke of jazz, these show tunes lose any traces of hyper-panache and sob story sap one might associate with Broadway. Instead, they come out swinging jauntily but covertly like in "Big Stuff," or splashing seismically with flourishes of drums emblazoned by the simple, yet heart-piercing melody of "America," pecked out on piano.

There's a strong sense of consciousness flowing through each player's every note and phrase. While Charlap gracefully solos with an honest integrity completely lacking in pretension as in "Lonely Town," the drums add faint, dusty shades of sparkle, while the bass tumbles delicately in.

With a Broadway composer for a father and a singer for a mother, Charlap grew up with these tunes. And you can tell he cherishes each one, as one does those familiar objects from home and life. Arranged for such a small group, tunes like "Ohio" and "Some Other Time," with their subtle intimations and gentle, earnest force convey a quiet yearning. Some songs, such as "Lucky To Be Me" and "It's Love," combine wonderful orchestration and intelligent playing that glow with a fabulous beauty—a stunning tribute to the charm and skill of the man who wrote them.

Cool; Lucky to Be Me; It