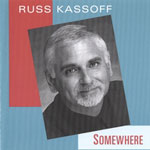 It has been a long time coming, but at the age of 52, Russ Kassoff has finally released his first album as a leader. Somewhere is split almost evenly between solo piano and trio tracks (plus one duo tune).

From the first plaintive notes of "Look For The Silver Lining, Kassoff's lyricism and brilliantly executed melodic lines shine through. Bassist Martin Wind matches the leader's lyrical quality, especially in his nimble excursion on "Somewhere. During a particularly engaging moment on "The Best Thing For You," following the theme statement, Kassoff and Wind play unison bop lines over the changes, before Kassoff takes off on his own solo.

Kassoff demonstrates here that he is well-versed in a variety of jazz piano styles. On a solo reading of Duke Ellington's "Love You Madly, he employs both stride and bop vocabulary, bouncing along joyously, exuding a sense of playfulness and tossing in the occasional quote. The closer, "Where Have All The Flowers Gone, finds Kassoff in a more impressionist mood, at times recalling Chick Corea's early-'70s solo sides for ECM.

On another highlight, "Oh, Lady Be Good, Kassoff's solo opens right in the pocket and stays there. His trio mates, Wind and drummer Tim Horner, provide the underpinning and allow him to reach heights of melodic invention. The drums then drop out and there is some simultaneous improvisation between Wind and Kassoff, before the latter takes off on a solo romp that dips into earlier piano styles. He quotes the theme from The Flintstones, and then the rhythm section returns and a quick denouement ensues.

There's hardly a single instance on this album where Kassoff doesn't convey emotional warmth and beauty. This is a most welcome "debut from Kassoff, a long-time member of the late Frank Sinatra's ensemble.

Look for the Silver Lining; Somewhere; It Only Happens When I Dance with You; A Sackets Sunset; The Best Thing for You; You Are All the World to Me; Samba du Sackets; I Remember; Love You Madly; It Never Entered My Mind; Oh, Lady Be Good; Where Have All the Flowers Gone (70:46).