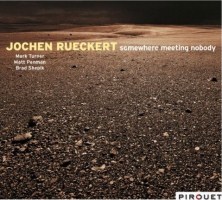 Drummer Jochen Rueckert has recorded in a variety of musical combinations, adding his distinctive rhythmic insights. He is secure in several styles, a trait that is evident in his compositions as well. His compositional abilities are affirmed by the nine tunes he has written for Somewhere Meeting Nobody, while his instincts as a drummer travel through all of the music.

Tenor saxophonist Mark Turner and guitarist Brad Shepik capture the essence of Rueckert's compositions and then describe it in their own cogent terms. The soulful "Buttons" is given a poignant reading by Turner, who keeps the soul of the tune burning within a compact emotional frame, as Shepik adds harmonic richness awash in gentle rhythms.

The melodic arch of "The Itch" is a fount for Turner, whose modulations inflect both tone and pitch. His fluidity, and use of tension and release are hallmarks of his approach, as he finds another home for his creativity. Shepik illustrates the tune in a bop context, his eloquence speaking volumes on how shading can shift the temperament of a song, his richly crafted passages complementing Turner perfectly. Rueckart and bassist Matt Penman add a fertile adjunct through a heavier groove to complete the spell cast by this charmer.

Turner's liquid notes are sweet and succulent as they sway beguilingly on the up-tempo "Vodka Sauce." Shepik spins a whirlwind of ideas with his pacing and melodic intuition. The fluidity is abetted by the rhythm section, with Rueckert's accents and judicious pacing elevating the bottom line.

Herbie Hancock's "The Sorcerer" is given a pliant and limber reading, with Reuckert and Penman envisaging a whole new pulse in tandem, cutting loose on the interaction while staying within the perimeter of logic. As the drums enliven the beat, Turner essays a facile take on the melody bopping around in seamless switches of register.

Rueckert is spot-on in this meeting with a fine band of musicians who give graceful testimony to his music.

The Itch; Buttons; Dan Smith Will Teach You guitar; Bridge and Front; Delete Forever; Pitot; Somewhere Meeting Nobody; Vodka Coke; To Have and to Hold; Way; The Sorcerer.