By BRUCE LINDSAY
February 26, 2013
Sign in to view read count 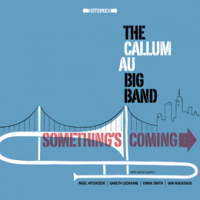 Trombonist and arranger Callum Au has amassed a remarkable wealth of experience, playing or arranging for, among others, the National Youth Jazz Orchestra, the Oxford University Big Band (he graduated from the university in 2011), Seth MacFarlane and Buddy Greco. He's a busy man—a list of his projects suggests that he's discovered the secret of the 30-hour day—and he's now found time to release his own debut, Something's Coming.

From the opening bars of Harry Warren's "September In The Rain" the band exudes warmth and confidence. It also swings, guitarist Jon Russell, bassist Laurence Ungless and drummer Ed Richardson establishing the feel with ease. Lockrane's "Roots" has a bluesy atmosphere—Hitchcock's high-energy alto and Russell's slick guitar solos fit right in. Trumpeter Freddie Gavita's "Beloved" is contrastingly gentler and more reflective and Au's own "Gentleman Jack"—dedicated to bass trombonist Jack Thirlwall—ends the album with a return to an upbeat swing.

The centerpiece is a suite from Leonard Bernstein's West Side Story. Some of the most recognizable and best-loved songs from one of the classic musicals, rearranged, re-harmonized and given something of a culture shift. Well, if Au's brave—or foolhardy—enough to stick his head over the musical parapet fair play to him. If the gamble fails, it fails. It doesn't fail.

A major contributing factor is Au's wise decision to avoid trying to make this British band sound like Sharks or Jets. "Cool" and "Something's Coming" capture the pace and energy of New York without the aggression. "America" lacks the fiery irony of the movie version and the bombast of the instrumental by '60s rockers The Nice, replacing them with a calmer, more positive, tone—everything really is OK in America.

Smith's beautiful vocal is the highlight of "Somewhere," but the song also benefits from exceptional solos by pianist Chris Eldred and Lockrane, on bass flute. Mackenzie's vocal on "Maria" is Mel Torme smooth. Best of all is "Tonight." The song's emotional intensity is held just a little more in check than usual, the two lovers are just a bit more controlled, almost as if West Side Story was based on the classic movie Brief Encounter (1945) rather than on Romeo and Juliet. This touch of English reticence gives the song an added poignancy, the doomed romance gaining even more pathos.

Something's Coming is, at its heart, a swinging big band album. It follows with irrefutable logic, therefore, that Au's ensemble is a swinging big band. That, in itself, would be a cause for celebration in these austere times, but Au makes it more than that, giving it a sense of dynamics, a feeling for the emotions and subtleties of the music as well as its swing. Something's Coming is something (very) good indeed.