Lukas Nelson & Promise of the Real: Something Real 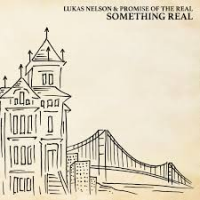 Talk to anyone who saw Neil Young on his 2015 tour with Lukas Nelson & Promise of the Real and no doubt you'll hear raves about the band as well as the Canadian rock icon. Nelson and co's Something Real reaffirms the complementary connection, but also posits the sons of Willie and their compatriots as a force to be reckoned with on their own.

At least at first, it's startling to listen to this record and not just because the slightly ramshackle country-tinged rock and roll, on "Surprise" and "Something Real," hearkens back to the Ragged Glory (Reprise, 1990) days of Neil with Crazy Horse The deceptively frail, somewhat reedy timbre of Lukas Nelson's voice, sounding like a perfect composite of his father's nasal tones and the high-pitched fragility Young so often adopts, may make a listener do an aural double take.

But there are other reasons to play close attention to these songs, many of them the lyrics (wisely printed on one side of the enclosed poster) of numbers such as the comparatively gentle balladry of "Set me Down on a Cloud" as well as the percussion-populated strut of "Don't Want to Fly." The penetrating intelligence of the former's pastel imagery is equal to the insistent passion of the latter, all of which reflects a savvy maturity and self-awareness usually beyond the grasp of those in their twenties like these bandmates.

But their musicianly skills are equally well-seasoned, so that the arrangements of their original material (and a wise outside selection of J.J. Cale's "I'll Make Love to You Anytime"), whether acoustic or electric, reflect the purpose of their chosen words. And as the six-piece ensemble stretches out like they do on "Ugly Color," exhibiting equally poise and patience, their instrumental interaction is as deserving of contemplation as their verbal expression, so much so more intervals of the kind would extend the otherwise somewhat brief (thirty-nine minute) playing time of the album.

That unity of Lukas Nelson and Promise of the Real as a band permeates all nine tracks, including perhaps most importantly, the exercise in irony (or is it nostalgia?) of their cover of "San Francisco (Be Sure to Wear Some Flowers in Your Hair)." Neil Young's ghost-like presence here on vocals during this otherwise contrived piece written by the Mama & the Papas' John Phillips, only serves to point up the authenticity of the band to whom this album title is so appropriate, particularly as it's the final number on Something Real.

Surprise; Something Real; Set Me Down On A Cloud ; Don’t Want To Fly; Ugly Color; I’ll Make Love To You Any Ol’ Time; Georgia; Everything Is Fake; San Francisco (Be Sure to Wear Some Flowers in Your Hair).

About Lukas Nelson & Promise of the Real