By MARK CORROTO
April 21, 2016
Sign in to view read count
Can the entire history of a musical genre be encoded in one man's DNA? If that is possible, then reading the DeoxyriboNucleic Acid molecules in saxophonist Peter Brötzmann's body would yield all the information a musical scientist studying the development of free jazz would require. Since the 1960s, he has been in the center of the most powerful maelstrom in music, and maybe the most controversial sounds. From his Machine Gun (FMP, 1968) octet, to Last Exit, The Chicago Tenet, Sonore, Globe Unity Orchestra, The Wild Man's Band, to his duos with Derek Bailey, Paal Nilssen-Love, Han Bennink, Sonny Sharrock, Hamid Drake, Keiji Haino, Jason Adasiewicz, and on-and-on, he has been both witness and participant in a revolution music. But what to listen to, where to start? Maybe some of the old, new, and reissued covered below will help.

The world lost pianist Borah Bergman in 2012. The seemingly always underrated improvising musician would have celebrated his 90th birthday in December 2016. One can, of course, rediscover his music from a scarce number of recordings like his solo work; A New Frontier (Soul Note, 1983), and Meditations For Piano (Tzadik, 2003) or his collaborative recordings with Thomas Chapin, Evan Parker, Roscoe Mitchell, and his two partners here Peter Brötzmann and Frode Gjerstad.

This live recording from the July 1996, Molde International Jazz festival in Gjerstad's home country of Norway is being heard for the first time. The tape, a very high quality DAT recording, was stuffed away in the saxophonist's drawer for years. His (and our) recent discovery, documents the first meeting between Gjerstad and Brötzmann, and, of course, allows us more of Bergman's music.

The three lengthy pieces chronicle three musicians creating a consensus, or, at least for free jazz, settling on a musical treaty.

The three would eventually record with each other in differing combinations; Brötzmann, Bergman and Andrew Cyrille's Exhilaration (Soul Note, 1997) is outstanding as is the Gjerstad/Brötzmann session Sharp Knives Cut Deeper (Splasc(h) Records, 2003).

The Left referred to in the title is for the pianist's legendary sinistral hand. He was an ambidextrous player, with the ability to generate ideas with both hands, seemingly independent of each other. His skills are on full display here. The opening track "Left Hand" acts as a sorting out. Brotzmann steamrolls his tenor to kick off the match. Soon Bergman matches strength-with-strength, and Gjerstad flexes, too. The first track mines mayhem with stretches of solo piano passages.

"Left Us" is more sympathetic. The trio is more comfortable with each other's approach and they cooperate in making, let's not say a melody, as much as a song. The music making is reciprocal, as if the three have decided they are equals. Interestingly enough, the final and longest piece "Left Out" at nearly 25-minutes, doesn't include Bergman until halfway through. He is content to sit back and listen to Brötzmann and Gjerstad perform a chamber-like recital before he enters. The music follows the narrative arc of a well-read classic story. 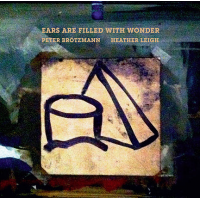 The intriguing new duo of saxophonist Peter Brotzmann and pedal steel guitarist Heather Leigh have released their first recording together, made during a 2015 live concert in Krakow, Poland. The encounter, brief at just 28-minutes in length, leaves a long-lasting impression.

Leigh is a West Virginia-born, Texas-bred pedal steel guitarist who now resides in Scotland and sounds something like a cross between Thurston Moore, Loran Connors and Oren Ambarchi. She has the ability to match the harsh with the melancholy and maintain a hypnotic line that is a perfect foil to the free jazz pioneer's sound.

The title Ears Are Filled With Wonder is taken, like many of Brötzmann's song titles, from a line of Kenneth Patchen's poetry. Like the poet's ferocious pacifist slant, there's nothing docile about this date. Brotzmann slowly enters with his vocalized overblowing, emptying his musical vessel before Leigh lays a quiet carpet of notes that she bends to her taste. The duo eschews the expected scuffle and brawl for what can only be described as a more pensive, meditative approach.

Leigh seems to bring out a blues expression in the German's playing. Even when she increases her volume, there's a restrained suffering about this music. Leigh moves into sustained notes, almost stepping into the world of noise, like Jimi Hendrix surfed that edge, before steering back towards the blues. The music ends with an eerie supernatural soundtrack of bass clarinet and dizzying twisted electric. Truly electric. 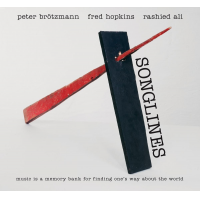 This reissue of an FMP live recording at the Total Music Meeting 1991 in Berlin has long been out-of-print since its issuance in 1994. It is a disc that received criticism from both sides of the Atlantic Ocean. You see, back in 1991, many writers and fans clung to the differences between American and European free jazz (some still do). The Europeans maintained a "kill-your-idols" approach to the New Thing in jazz, begun in the 1960s by John Coltrane, Albert Ayler, and Archie Shepp. The Americans mostly scratched their heads, and pointed out the same divisions between British improvisation and that of Germany and The Netherlands. In October of 1991, the concerts featured three saxophonists Evan Parker, Charles Gayle, and Peter Brötzmann, three bassists Fred Hopkins, William Parker, and Peter Kowald, and three drummers Andrew Cyrille, Rashied Ali, and Tony Oxley. Besides this disc, the concert produced the hallowed Touching' On Trane (FMP, 1993) recording by Gayle, Parker, and Ali.

Let's let the free jazz figs argue the contrasts between the two continents (and an island) and we can celebrate the return, and remastering, of this gem.

Songlines is a fantastic introduction to those new to the music of Peter Brotzmann. It is the free jazz equivalent of Coltrane's Ballads (Impulse!, 1963) recording. It acts as an easing into the heavy ideology the German created in the late 1960s. His trio is made up of bassist Fred Hopkins, a co-founder of the free jazz trio Air with Henry Threadgill and Steve McCall and a collaborator with David Murray, and Coltrane's last drummer Rashied Ali. It is the only recording Brotzmann made with Ali, although he did record in 1991, The Atlanta Concert (Okka Disc, 2001) with Hopkins and Hamid Drake.

The music is very accessible, and not unlike Brotzmann's solo recordings No Nothing (FMP, 1991) and 14 Love Poems (FMP, 1984), he doesn't eschew intensity, but pays mind to melody and, dare I say, swing? Said pulse is provided by Hopkins, keeping time in a jazz expression, while Ali accents with his busy cymbal work. Brotzmann gives his collaborators plenty of room here, laying out when he sees fit. It's the blues we heard on his solo work. For certain, those who wished to divide free jazz fans by continent scoffed at this recordings. But listen fifteen years later to the great man's collaborations with his Chicago Tentet, Heather Leigh, Sonore, and Michiyo Yagi. You'll hear the same synergistic cooperation.

Ears Are Filled With Wonder

Tracks: Ears Are Filled With Wonder.

Tracks: No Messages; Old Man Kangaroo; Man In A Vacuum;.......It Is Solved By Walking; Songlines; Two Birds In A Feather.