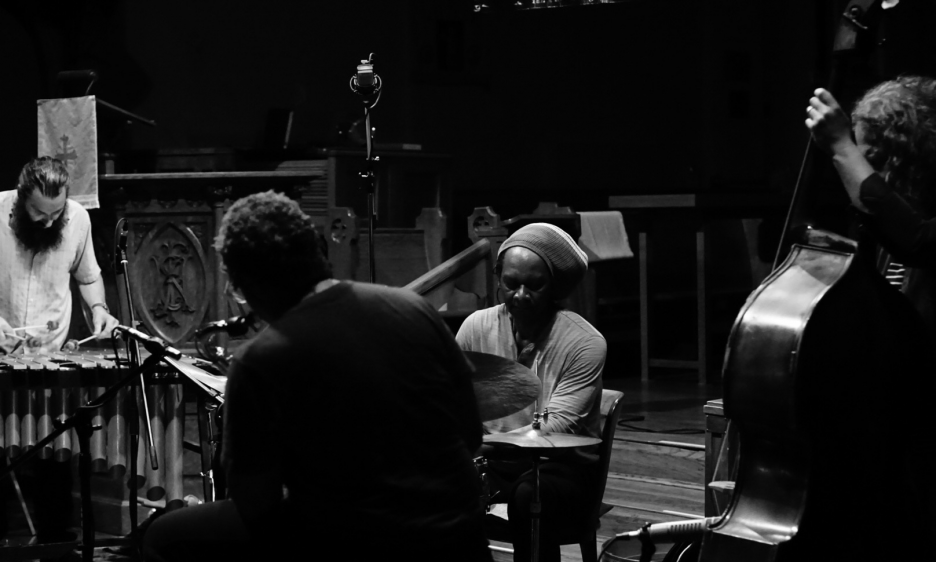 I must confess that I spend very little time in churches, so I would not normally be inclined to spend the first weekend of summer in one. But sometimes exceptions must be made, and such an exception could only be made for a festival of creative music.

A church can be a dodgy proposition for presenting music. Ideally, the acoustics of the church are suited to the music and instrumentation. Where one is listening in the church makes a difference. The stage is another factor. Often, there is not enough rise to allow everyone in the audience to see well. And then of course, there is the discomfort factor of the hard, wooden pews. That said, some of the most memorable performances I have ever attended were held in churches, from Guelph to Montreal to Victoriaville.

Happily, St. John the Evangelist Anglican Church in West Hamilton, aka The Rock on Locke, was a congenial site for the sixth edition of Something Else! Festival, curated by Cem Zafir and presented by the rest of the team at Zula Presents. A festival of music that is beyond category but draws from many influences has a small audience worldwide, much less in a rock town, like Hamilton. So the festival, like the music itself, is done for love. There is nothing to be done about the pews, but the acoustics of the Rock are clean and the sightlines generally acceptable, depending on where one sits—or squirms. The festival schedule consisted of six four-hour sessions at the church and a Friday afternoon of outdoor performances in the garden of a downtown museum, the Whitehern House and Garden.

The featured performers at Something Else! were Hamid Drake and Iva Bittova. The lineup also included a healthy number of female musicians, a variety of local musicians of various ages, and a New York City contingent of Sam Newsome, William Hooker, and Don Byron. I arrived in Hamilton from Montreal in a pouring rainstorm midway through the Thursday night session, just as Indigenous Mind were starting. The group—Drake on drums, Joshua Abrams on bass and guimbri, and Jason Adasiewicz on vibraphone and ballophone—are extremely flexible musically, and this set saw the trio exploring African influences and motifs in constantly moving, shifting rhythms and colors.

Friday afternoon's session took place in the garden of a former mansion (now a museum) near Hamilton City Hall. Jason Adasiewicz solo on vibraphone was gentle, subtle (as is typical for him), and playful, perfect for an afternoon in a garden. Following that set, saxophonist Brodie West joined Hamid Drake for a 40-minute set of engaging blues-based free jazz improvisation.

Iva Bittová is a unique performer, using Czech folk songs as source material, inspiration, and jumping-off point for improvisations with voice and viola. Her vocalizing includes singing, cooing, growling, and all manner of vocal gymnastics, with wild, abrupt leaps, swings, stops and hard left turns. I don't know what it all means, but the sense of total play in Bittová's music draws one into the music by awakening memories of childhood play, with all its fears, joys, and promises.

I had seen Bittová only twice before, the first time twenty years ago, so it was a rare opportunity to see her perform three times in one weekend. On the other hand, I have seen Hamid Drake play many, many times over the past two decades. Their duo on Friday evening at the Rock on Locke was one of the most compelling duo performances I have ever seen. Communication is at the top of the list of requirements for a successful improvisation, and Bittová and Drake were almost intimate in the way that they listened and responded to one another over the approximately 45 minutes from the moment they entered, playing, down the aisle of the church until the moment that they went back up the aisle at the end of the performance. Bittová did what she does, and Drake took his part of the musical conversation with her on frame drum, using all of his considerable sensitivity and control to cary it forward.

Iva Bittová 's solo set in the evening expanded on her garden set from the day before, and she benefited from the space of the stage and the acoustics of the church to fully express herself

Indigenous Mind were joined by Don Byron, who alternated on clarinet and tenor saxophone in Saturday evening's closing set. The music morphed from a non-idiomatic free improv intro to swinging and grooving versions of compositions, the high level of communication among the musicians most evident in the smooth, seemingly telepathic transitions between the pieces. Each musician had a chance to stretch out, all of them brimming with musical ideas in a performance that was musically compelling and spiritually uplifting.

Once in a while, one is totally amazed by a performance by musicians one knows little about or has not seen in the particular context presented. I was told sometime earlier in the day not to sleep on No Silenz, a project of Susanna Hood (dance and voice) with fellow Montreal resident Jason Sharp on bass saxophone and French musicians Fredéric B Briet (Magma) on double bass and Christophe Rocher (Ensemble Nautilus) on various clarinets. That was really good advice. I have to confess to somehow never having seen Hood perform, even though we live in the same city, nor Briet or Rocher.

Hood's movements were deeply physical—and except for one segment, during which Rocher played a solo on Bb clarinet that for me was the single best musical highlight of a festival that had a number of highlights—she remained in motion for the entire performance. Her body control was astonishing, as she could change the entire character of a movement, from a shy elf to a raging goddess in less than the twitch of an eye. The music was, not surprisingly, given the instrumentation, steadfastly in the lower registers, swelling, bending, bowing around Hood's voice and establishing the mood for the movements and the words. The fact that I did not understand what Hood was vocalizing probably enhanced my enchantment with the performance, freeing me from the distraction of linguistic meaning.

The intensity of those three Saturday performances was somewhat exhausting, and perhaps the pews finally got to me, but Sunday was something of a letdown, at least for me. The solo set by Sam Newsome was whimsical and playful, and Don Byron's solo set, which closed the festival on Sunday evening was deeply lyrical and soulful, but attention flagged through thoroughly musical and eminently enjoyable sets, though in quite different ways, by two groups from Toronto, Brodie West's Eucalyptus and the four musicians of Ear-Cam. Eucalyptus' user-friendly set of grooving was right for a Sunday afternoon, while Ear-Cam's provocations, driven by the always-inspiring voice artist Christine Duncan, were perhaps too unsettling for someone who had been sitting in pews for extended periods over the previous couple of days.

Festivals of creative music like Something Else! are gatherings of the faithful, and it is appropriate that they often take place in churches, even if the reason for holding a festival in a church is somewhat pragmatic (read: price, size, availability). A church is a community place, and the people who go to Something Else! form a small part of a relatively small worldwide community. Also, there is a spiritual aspect to the music, explicitly or implicitly, admitted or denied.

We are reminded of that at every such festival, but the point was brought home in Hamilton when artistic director Cem Zafir's mother died in shortly before the festival. Cem flew to Istanbul on Monday evening to bury his mother, then left Istanbul on Friday morning to arrive in Hamilton on Friday afternoon. As physically and emotionally exhausted as he was, Cem, I think, made it through the weekend buoyed by the love of the people with whom he, they, I, we form a small extended global family.

It is good to be reminded of these things, and sometimes one has to spend some time in a church to have that opportunity.