Harry Allen: Something About Jobim

By JAKOB BAEKGAARD
March 16, 2016
Sign in to view read count 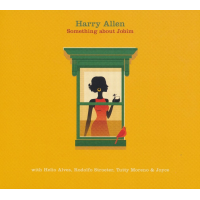 Back in 1964, saxophonist Stan Getz made one of those perfect albums. He teamed up with famed Brazilian songwriters and guitarists, Joao Gilberto and Antonio Carlos Jobim, and delivered one of the best records in his career: Gezt/Gilberto (Verve, 1964). The combination of the wistfully vibrant bossa nova and the sensual saxophone sound of Getz proved to be irresistible.

History has a way of repeating itself and now it is time for yet another crucial meeting between a group of Brazilian musicians and an American saxophonist. Harry Allen could be considered one of the most prominent heirs to the sound of Getz, so it was only a matter of time before he would find the ideal partner to make an album with a perfect Brazilian sound. In fact, his partner found him. In the elaborate notes to the album Something About Jobim, producer and bassist, Rodolfo Stroeter, tells the story of the album. When his good friend, record producer Søren Friis of Stunt Records, gave him a bunch of records to listen to, one of them especially caught his attention. It was Allen's Johnny Mandel-tribute: Quietly There (Stunt Records, 2014) and when he heard the sound of the saxophone, the title: Something About Jobim came to him.

As it turned out, the idea thankfully became a reality. Stroeter and Allen met in New York and recorded the album with pianist Helio Alves, drummer Tutty Moreno and special guest, Joyce, who contributes with her lovely voice and guitar playing and the only composition where Jobim is not involved as a composer. Instead, he is the subject of an homage: "Theme for Jobim." It is a slow ballad with Joyce's passionate voice and warm acoustic guitar and Alve's romantic piano chords. Allen comments on the song with his saxophone and he does not need to speak Brazilian. His whispering sound says it all.

The album highlights some of the lesser-known chestnuts in Jobim's oeuvre. There is no "Girl from Ipanema," but instead, it is wonderful to become acquainted with "Sue Ann" whose melodic line is pure Jobim and "Falando de Amor" is yet another top-shelf ballad.

There is so much beauty and warmth on this album. It is a great musical gift and, hopefully, it will be received by all lovers of Brazilian music around the world and the many people who have the record by Getz and Gilberto in their collection.