Someone To Watch Over Me: The Life and Music of Ben Webster

By BOB JACOBSON
November 21, 2007
Sign in to view read count 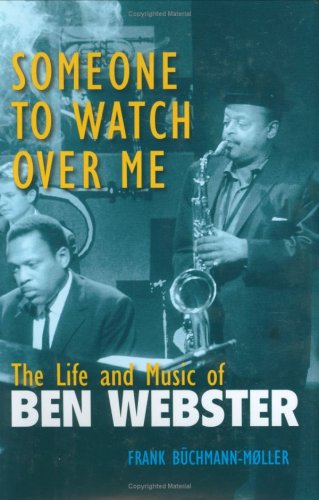 Someone To Watch Over Me: The Life and Music of Ben Webster
Frank Buchmann-Moller
Hardcover; 400 pages
ISBN: 0472114700
University Of Michigan Press
2007

Unless you already know a tremendous amount about saxophonist Ben Webster, you'll learn so much from Frank Buchmann-Moller's new biography. Unless I'm mistaken, you'll soon want to hear more of the unique Webster sound.

Danish jazz archivist Buchmann-Moller presents an extremely comprehensive chronicle of Webster's musical life and much of his personal life, including brief romances but life-long friendships with singer Billie Holiday and pianist Mary Lou Williams. The list of those he played or recorded with reads like a Who's Who of the swing era and beyond, leading the reader to wonder who Webster didn't play with. The author includes some real surprises, such as Webster on the road with R&B innovator and multi-instrumentalist Johnny Otis, performing with saxophonist Ornette Coleman at the 1959 Monterey Jazz Festival, and concerts with the rock group Savage Rose in 1972, the year before his death.

Praise for Webster comes from some unexpected quarters, from bass guitarist/singer Sting to saxophonist Archie Shepp. Truly eloquent commentators include drummer Ed Thigpen, Shepp, pianist Dick Katz, bassist Niels-Henning Orsted Pederson, writer Dan Morgenstern and bassist Milt Hinton. We learn of Webster's influence on reed players like Tony Scott, Charlie Rouse, Stan Getz, Johnny Griffin and Shepp, and the impressions he made on Sting and saxophonist John Coltrane ("I wish he'd show me how to make a sound like that.")

Clearly, Buchmann-Moller greatly admires his subject, but he doesn't omit negative commentators or frequent mention of Webster's problems with alchohol. Nor does he avoid mentioning the occasional uninspired performance.

At times the author falls into the trap so endemic to the musician biography—recounting/analyzing performance after performance, recording after recording. My only other criticism is that there is little historical context here (e.g. except for drummer Shelly Manne's uniform, World War II isn't even mentioned). More importantly, though, if you want to find out more about one of jazz's most distinctive voices, Someone To Watch Over Me is a rich resource. It includes 4 pages of recommended CDs, DVDs and VHS tapes; 19 pages of notes; and 16 pages of photos.