The Great Jazz Trio: Someday My Prince Will Come

By MARK SABBATINI
September 7, 2004
Sign in to view read count 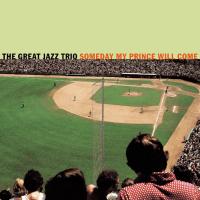 When three guys with 130 years of experience collaborate on a set of oft-recorded tunes, certain things are expected.

They'll be rock-solid and, if not the freshest sound going, still capable of some surprises. There won't be any nonsense or players who don't "get" what their colleagues are up to. Traditionalists will find something to make it worth hailing as an important statement.

This trio can actually get away saying "mission accomplished."

Someday My Prince Will Come is a worthy salute from Hank Jones on piano, his brother Elvin Jones on drums and Richard Davis on bass. The session is Hank's final collaboration with his brother, who died in May of 2004. The somewhat conservative collection of ten songs commands more respect than awe, but Elvin fittingly delivers many of the album's sharpest and freshest moments.

Hank Jones, whose influences date back to the likes of Art Tatum, anchors the session with all the polish one expects from a frontline player with six decades of recording experience. He is always interesting, if seldom novel, proving there is still plenty of life in spelling things out in traditional fashion. Davis, an underrated player with relatively few albums to his name during a lengthy career, provides bottom heft with his typically strong '50s and '60s bop pickings. But some of his best moments come when he picks up a bow on songs like "Moose The Moochie" and "Long Ago And Far Away," serenading and soaring on lines that stand up much better as lead voicings.

The surprise is Elvin Jones. His tuning may be old school, but there's a number of unexpectedly progressive solos that should snap the complacency out of listeners starting to coast on the traditional flow. He elevates the expectations game beginning on the opening "Caravan," keeps songs like the title track from becoming lackadaisical ballads and dominates "You'd Be So Nice To Come." It's almost too bad the song is followed by "Smoke Gets In Your Eyes"—where Hank Jones delivers some of his finest bits of soothing lyricism—since it could serve as a fitting epithet for the drumming legend.

Someday My Prince Will Come isn't an artistic landmark, but it is an album fans of any of these three players will want to check out, especially with Elvin Jones exiting on such a strong note.

Caravan; Softly As In a Morning Sunrise; Moose the Mooche; A Child is Born; Satin Doll; Someday My Prince Will Come; The Shadow Of Your Smile; Long Ago and Far Away; You'd Be So Nice To Come Home To; Smoke Gets In Your Eyes.

About The Great Jazz Trio