Greg Reitan: Some Other Time 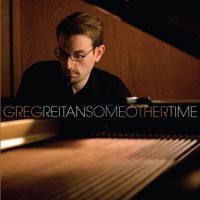 The notes he strikes—ebony and ivory—stay interminably in the memory, hanging life-like and sensuously, fully laden on the canopy that crowns the mind's mind. Ideas abound and spring forth—even down the choruses of well-worn standards—and they sparkle end-to-end on Cole Porter's "All of You," Guaraldi's "Star Song," and on Bernstein's "Some Other Time," the title song, which is also an ironic harking back to a future-past and the seeming infinity of the life of the song's music itself. This, and the fact that the idioms of the melodies and their exquisite hidden phrases are caressed and coaxed out of each song by Greg Reitan on his debut outing all make Some Other Time a spectacular start to a career much anticipated.

Reitan channels the legendary grace and lyricism of Bill Evans and the endless harmonic flow of Keith Jarrett in a puckish voice redolent with almost Byzantine decor arranged in flowing sonic necklaces. It would appear that all sound is beautiful, whether it be 'sung' ponderously, as in the endearing sketch of "The Wayfarer," the crystalline sonority of "Northern Windows," or in the dazzling mystery of "Star Song." And despite the deliberate and rarified virtuosity that abounds throughout the record, Reitan remains refreshingly down-to-earth, not only in a humorous way, but also in his ability to coax and stir the music's notes into a dance appropriate to mood and swing.

Coltrane's "Giant Steps," for instance is slowed down considerably at the start, and features a spectacular improvised opening in waltz-time before a perfunctory unison trio statement before launching into a blistering melodic attack. Then the song dances its way into a waltz, after superb polyrhythmic bass and the soft splashes of cymbals igniting rhythmic figures around the whispering interlude on tom and snare. Even on the otherwise still life of "Time Remembered," there is a shuffle of dancing feet as well. And of course Pat Metheny's "Unquity Road," though not a nod to Metheny, Pastorius and Moses, does pay tribute by sparkling just a brightly as the original.

A pianist of Reitan's mature genius is rare and he rises to the challenge of delivering a voice in a trio setting set by predecessors of the mythic quality of Paul Bley, Bill Evans and Keith Jarrett. It helps, of course, to have a small and powerful cohort featuring Jack Daro, whose fingers seem to be on fire every time he strokes the strings of the bass and also Dean Koba, who—it appears—ravishes the hides of the drums just as much as he caresses them and other brass fare around his traps. This is a record that gives new meaning to the words "lyrical beauty."