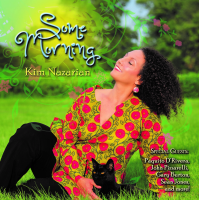 Kim Nazarian is one of a kind. Sure, there are other singers with lovely voices, great ears and impeccable time, but not many as warm and open on stage; there are even fewer who can phrase a lyric the way she does, so that you believe every word. A founding member of the New York Voices, Nazarian supplies the sweet soprano at the top of their peerless blend, as well as most of the bubbly, joyful energy that makes the group so delightful to watch. The NYV has been on the road for decades, performing at the world's greatest venues with many of its best musicians. But despite their lunatic schedule, three Voices have managed to release at least one solo CD, while Some Morning is Nazarian's first. It took six years to record, but it was well worth the wait.

As fans expect and newcomers soon discover, this is not your run-of-the-mill CD. This is Nazarian's deep musicality on full display, with her unusual choices of material, style, tempo and mood enhanced by her wonderful arrangements and (primarily) those of her brilliant husband/trombonist/producer/composer/engineer, Jay Ashby. Given today's world of cookie-cutter music, such versatility and individuality are courageous, and reflect Nazarian's determination to be completely true to herself. This also means no electronic fixes, enhancements or autotunes: any perfection heard in her singing is natural and real.

Nothing else is predictable or commonplace, either. This is obvious from the opener, a unique "double-hero" medley associated with Ella Fitzgerald and J.J. Johnson. This introduces Nazarian's expertise for swinging and scatting with a big band, and features a strong Ashby solo (apparently, there is no other kind). Then comes "Tell Him I Said Hello," which a young Betty Carter performed as a surprisingly boring ballad (at least, as seen on YouTube). Here, it lifts and blossoms into a lush bossa, with a heartbreaking, tender vocal from Nazarian, and a shimmering solo from Paquito D'Rivera.

Arguably, the peak performance is "Still Life," a haunting Ashby melody with lyrics by Nazarian that create their own version of "I'll Be Seeing You." Anyone who's ever grieved a loved one will find new hope in this track. The simple piano backing is exquisite, and Nazarian has never sounded more intimate and loving as the song embraces everyone who's gone, as well as everyone left behind. It's nothing less than extraordinary.

This deeply emotional moment is followed by the sunny title track, a little-known gem from Ivan Lins, the beloved Brazilian composer. This features tropical percussion from Ashby, a soothing cushion of background vocals, and some silvery light from master vibeist Gary Burton. Also notable is "All in My Heart," a lovely original that pianist Mark Shilansky saved to debut here, so that Nazarian could do it justice. And boy, does she.

There are familiar songs as well, but they've been transformed by altered time signatures and/or harmonies. For example, most singers render "What'll I Do?" as a sticky-sweet waltz, but here, Nazarian's longing and some ominous chords highlight the real loss in the lyric. According to the notes, this is intended to be an anti-war plea, but it's subtle: you have to listen for Jamey Haddad's increasingly martial drumming at the end.

Similarly, by casting Stevie Wonder's "If It's Magic" in 6, with surprising textures of kalimba and tabla, this old tune gets a fresh coat of interest. And Cole Porter's "Kiss Me Kate" showstopper, "So in Love," gains surprising urgency when played in 7, which inspires Nazarian to be increasingly intense, ethnic, and sexy. Meanwhile, the imaginative addition of Caitlin Merhtens's harp and Marty Ashby's guitar detours the tune even further from its usual route.

Two novelty tracks are included: a gentle comic duet between Nazarian and John Pizzarelli on "Gotta Be This or That," a hit for Benny Goodman, and a charming family collaboration on "Que Sera, Sera." The album ends as it began, with a big band track by Ashby that's all snap, crackle and pop. A good way to characterize Some Morning is to borrow another famous title: "Oh, what a beautiful morning!" Another is to simply say, "Brava," and put the CD on repeat play. For weeks.

Robbin's Nest/Boneology; Tell Him I Said Hello; Gotta Be This or That; All in My Heart; What'll I Do; Still Life; Some Morning; So in Love; If it's Magic; Que Sera, Sera; Road to Kursk.