By DAN MCCLENAGHAN
June 2, 2012
Sign in to view read count 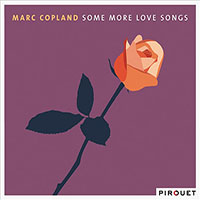 Pianist Marc Copland—who, oddly, began his jazz career as a saxophonist—took an artistic leap forward with his three New York Trio recordings on Pirouet Records. Employing a rotating crew of bassists with Gary Peacock, Drew Gress, and drummers Paul Motian and Bill Stewart, the pianist rose to a higher profile via his nearly unsurpassed musical excellence. The pianist interpreted standards (and some not-so-standards), along with his own top-flight original compositions, in conjunction with an astute marketing choice of releasing, over the course of three years, this triptych of similarly handsomely packaged outings, much in the fashion of Brad Mehldau's five Art of the Trio (Nonesuch Records, 2011) recordings.

ADVERTISEMENT
It's hard to imagine the success of Copland without Evans' ground-breaking, his strong contribution to trumpeter Miles Davis' classic Kind of Blue (Columbia, 1959), and the subsequent consistency of his superb trio recordings over a more-than twenty-year run, from the late fifties until the pianist's untimely death in 1980. Copland has taken Evans' approach of trio democracy, sonic luminosity and harmonic depth and created his own personal language on this—the high point for now—musical journey.

The set opens with Joni Mitchell's lovely and fragile "I Don't Know Where I Stand," a re-visitation of the tune Copland recorded solo on Alone (Pirouet, 2009). This version benefits from the nuanced accompaniment of his trio mates, bassist Drew Gress, and drummer Jochen Rueckert. The mood is floating and uncertain, mirroring the lyrical content of Mitchell's version, leading into an up-tempo, beautiful and brash take of the classic "My Funny Valentine," with its implacable momentum.

"Eighty One"—from the songbook of legendary bassist Ron Carter and Miles Davis' ESP (Columbia, 1965), the debut from what would become the trumpeter's second great quintet—is cool and mysterious, the interplay highly nuanced. "Rainbow's End," Copland's lone original composition, shimmers like late afternoon sunlight reflecting off the facets of wavelets on a wind-ruffled pond, while Cole Porter's ever-familiar "I've Got You Under My Skin"—a 1956 masterpiece by Frank Sinatra, who sounded supremely suave and confident on his take—gets a wandering and impressionist treatment by Copland's trio, with the heart of the melody slipping in and out of the shadows.

The set closes with one of its most tender moment, Victor Young's "When I Fall In Love," brimming with sparkling optimism and a fitting wrap-up to what may be Copland's finest trio outing to date.

I Don't Know Where I Stand; My Funny Valentine; Eighty One; Rainbow's End; I've Got You Under My Skin; I Remember You; When I Fall In Love.