By JAKOB BAEKGAARD
June 4, 2016
Sign in to view read count 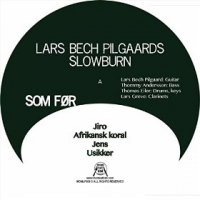 Danish guitarist Lars Bech Pilgaard has been involved in a number of underground projects and has his own record label, Mom Eat Dad Records. Recently, he has moved in an exciting new direction where influences from African music, jazz and experimental rock are combined. This original sound was featured prominently on his new project, Klimaforandringer (Climate Change), and he continues to add new layers to this sound on the album Som før (As before).

This time, the band is not Klimaforandringer, but Slowburn, one of Bech Pilgaard's older projects. Together with bassist Thommy Andersson, drummer Thomas Eiler and reed-player, Lars Greve, he creates repetitive and rhythmical drones that unfold a strange landscape of sound. However, the use of melodic riffs gives the music immediate accessibility as the textures change.

"African Koral" builds up rhythmical tension that is not released before Bech Pilgaard's African high life-guitar licks are transformed into a trashy outburst of noise while "Jiro" is all pawnshop-surf guitar and throaty horn motifs.

"Drømme" ("Dreams") is a psychedelic landscape with Andersson's thick electric bass laying the foundation for a journey where a spider-web of crystalline guitar sounds slowly evolve into a steady rhythm. This tension between poetic abstraction and immediate riffs and rhythm lies at the heart of this fascinating record that sounds as if the iconic post-rock band Slint travelled to Africa to play jazz and psychedelic music.

Som før is released digitally and on delicious green vinyl, but it comes without a cover, there's only an inner sleeve. This kind of signifier of an underground release is unfortunate because Som før actually goes beyond the narrow community of the underground. It might be that the musical language of this group is experimental, but it is also accessible and should be able to reach out to a wider audience than the packaging suggests.