By DAN BILAWSKY
November 29, 2013
Sign in to view read count 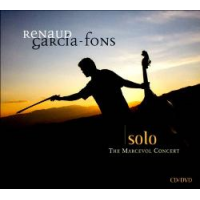 In the hands of even the most accomplished professionals, the bass is but a single instrument which happens to serve a few purposes; in the hands of Renaud Garcia-Fons, the bass is a world unto itself. On Solo: The Marcevol Concert, Garcia-Fons demonstrates his singular approach to the instrument on a program of music that's both worldly and wondrous. Andalusian allusions, African accents, Eastern spices, Middle Eastern ideals and more merge in the hands of this beyond category virtuoso.

Plenty of people have marveled at Garcia-Fons' work in various settings like guitarist Nguyen Le's trio, his own trio with flamenco guitarist Antonio "Kiko" Ruiz and percussionist Pascal Rollando, and/or the duo with guitarist Sylvain Luc, but this album highlights the fact that he needs no collaborators to make his bones in the music world. In fact, hearing and seeing him all by his lonesome may be the best way to experience the one man show that is Renaud Garcia-Fons. Extended and extensive technique(s) allow Garcia-Fons to conjure the likeness of the violin, oud, berimbau, cello, cajon, kalimba and more.

In September of 2011 Garcia-Fons set up shop for two days at Prieuré de Marcevol in Pyrénées Orientales, France and put on a solo display that redefines the very notion of solo playing; he's the only person performing here—true to the nature of the word "solo"—but he conjures all manner of multiple sounds with his hands and bow while triggering pre-recorded accompaniment and loops with foot pedals. Hearing it on CD is impressive, but seeing it on the accompanying DVD is something else. The DVD portion of CD/DVD packages are often viewed as superfluous, but the reverse may be true here.

From the opening "Palermo Notturno," which finds the man of the hour mixing Spanish and Eastern sounds and tapping away on the body of his bass, to "Kalimbass," which has the bassist imitating a kalimba by placing paper beneath the strings, Garcia-Fons finds a way to bridge gaps between artistic realms. Elsewhere, he lets the pure sound of his instrument ring through ("Marcevol") and delivers whistling tones that soar ("Voyage A Jeyhounabad"). Garcia-Fons wears his virtuosity on his sleeve at all times, but he never uses it for vein and empty displays of might; his technique serves the songs and the songs serve as a reminder that the art of solo playing is only limited by the imagination. Garcia-Fons' Solo: The Marcevol Concert is a marvelously original amalgamation of classical, jazz and world music.