By HRAYR ATTARIAN
March 4, 2016
Sign in to view read count 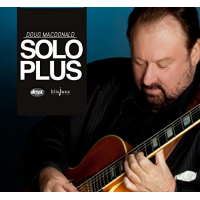 The field of jazz guitarists seems to have exploded with variety of discs that put one sort of spin or another on the music. From Latin touches to rock and roll beats and from avant-garde dissonance to popish smoothness this releases run the range of sounds striving to be "exeptional." It is, therefore, refreshing to hear a master of the instrument perform unadorned relying solely on his virtuosity. Guitarist Doug MacDonald does just that on the intimate and engaging Solo Plus.

Recorded live on August 18th 2014 at Umbrella Studios in Chatsworth California the set finds MacDonald interpreting several standards and three originals. The remarkable facility and superb proficiency with which he manipulates his strings are on display on every single track so the momentum does not lag at all from start to finish.

Opening with songwriter Nacio Herb Brown's popular "You Stepped Out Of A Dream" MacDonald sets the warm, cozy vibe that marks the rest of the session. While maintaining the tune's classic charm and thematic nostalgia, MacDonald modernizes it with such sophistication and fluidity that he makes it timeless in its appeal.

The disc closes on a wistfully romantic mood with composer Jimmy Van Heusen's "Darn that Dream." MacDonald elegantly embellishes the main melody with shimmering tones and cleverly overlapping phrases. The lithe and urbane reinterpretation of the standard recasts it in a delightfully soulful guise.

On his own "Blues in the World" MacDonald laces his languid, complex chords with a charming, earthy passion and a suave swagger. His performance crackles with spontaneity and simmers with a stirring groove.

MacDonald also deftly creates a few charming medleys on this captivating album. On a mélange of "Through With Love," "Stairway To The Stars" and "These Foolish Things" he builds an introspective ambience as his intricate improvisations flow from one song to the next with silken lines and lyrical poetry. He exposes the elemental beauty of each and uses them to construct a unified, exquisite piece.

Guitar players on the contemporary jazz scene maybe a dime a dozen but MacDonald belongs in the elite few who stand head and shoulders above the rest. His brilliant musicianship and expressive style make his artistry singular without resorting to needless accoutrements. MacDonald's work does not attempt to be unique. It just is.

You Stepped Out Of A Dream; Triste; Umbrella Waltz; Medley I'm Through With Love/Stairway To The Stars/These Foolish Things; If I Had You; Wave; Medley Autumn In New York/Chatsworth/Minor Blues; Laura; Medley Gentle Rain/Corcovado; Medley Out Of Nowhere/The Song Is You; I Don't Stand A Ghost Of A Chance With You; Blues In The World; Bandera; Darn That Dream.