By CLIFFORD ALLEN
August 7, 2008
Sign in to view read count 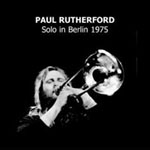 From the 27th to the 31st of March, 1975 the FMP label held its Workshop Freie Musik at the Berlin Academy of Art, and among usual suspects Alexander von Schlippenbach and the Globe Unity Orchestra, the festival held various aggregations for brass instrumentalists, in groups and as soloists. Among the trombone soloists, whose performances lasted approximately one half-hour, were Germans Albert Mangelsdorff and Gunter Christmann, Dutchman Willem Van Manen, Frenchman Vinko Globokar and the English enfant terrible Paul Rutherford, who passed away a year ago this month.

In an interview shortly before his passing, Rutherford related the experience to this writer: "I remember one case many years ago in Berlin at the FMP festival, and there were five or six trombone players from all over the place. One of the guys who played was involved in contemporary music, [Vinko Globokar] and he had to do a solo one night, another night it was me, and I think another night was Gunter Christmann. Anyway, Vinko came up and said 'what are you going to play for your solo?' I said, 'I don't know. I'm just going to go out and play.' He said 'don't you have an idea what you're going to start with?' ï I said 'no, and I don't want any idea. I'm going to improvise, and I'm going to go on to play improvised music.'"

This situation was luckily recorded, though only five minutes of the performance, a piece titled "Berl in Zil," was released previously on the commemorative boxed set of FMP's tenth anniversary, For Example. Solo in Berlin 1975 collects the entire gig, as well as performances from the Total Music Meeting 1975 in Berlin's Quartier Latin. Rutherford has been characterized as a musician-storyteller, which is interesting because one thinks of a storyteller as one who has a preordained idea of what one is going to be said. Yet Rutherford creates an environment in which events occur, jocular or athletic, pensive or indescribable as he vocalizes, hums, whinnies, belches in a treatise of sonic exploration on not only "flicking the bugle," as he says, but seeing what motion coupled with breath can do. If images and colors are part of this treatise, so be it, but that's not the intent at which he approaches his horn.

There's the conflation of low, held vibrato and crisp raucousness, percussive clanging and what approaches circular breathing and nearly electro-acoustic sonic output. A manic, enraged bebopper is proof—if one needs it—of Rutherford's technical ability (or audacity) in "Berlintro," screeching and howling his way through J.J. Johnson on a path towards "Rosmosis." "Berl in Zil" finds him battering piano strings alongside the slide, plucking and playing with resonance as he blows into the soundboard. These sonic events occur, but as in life, they all spring from one another, and the humanity of the experience is its defining thread.

Berlintro; Berl in Zil; A Song My Granny Taught Me; Not a Very Wonderful Ballad; Primus; Secundus; Tertius; Quartus.