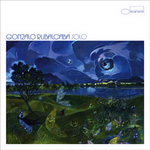 The metamorphosis of Cuban pianist Gonzalo Rubalcaba has taken a gifted player from a fiery caterwauler to a nimble, introspective musician. His early recordings were fueled by youthful enthusiasm and the encouragement of the likes of Dizzy Gillespie, Charlie Haden and Jack DeJohnette. Like his musical compatriot, the French phenom Jackie Terrasson, he has talent on loan from the jazz gods.

Twenty years later and now in his early forties, Rubalcaba reveals a more introspective side, one he has hinted at on albums like Paseo (Blute Note, 2004); his duo with Joe Lovano, Flying Colors (Blue Note, 1998); and Charlie Haden's Nocturne (Verve, 2001). Like his countryman Bebo Valdes, he blurs the lines between jazz, classical and folk, easily convincing you there need be no distinction.

The disc begins with the spiritual "Rezo, a short prelude of Afro-Cuban chant which he turns into quieting silence. Next he moves into his familiar "Quasar, with a hypnotic repeating left hand and dancing right. The pianist bases four improvisations—"Paseo Illuminado, "Paseo en Media Luz, "Paseo Azul, "Paseo Morado —on John Coltrane's "Giant Steps. The revolutionary form, with its famous changes, forms a loose skeleton for the changing improvisations. Rubalcaba displays not only a fertile mind for rhythm, but also a keen sense of creation.

The disc ends with the snail-paced bolero "Besame Mucho. Comparing this version to his 1991 take on The Blessing, we hear a more complex higher level of communication. Yes, the firebrand youngster has become a master musician.