By EYAL HAREUVENI
August 3, 2014
Sign in to view read count 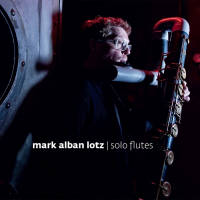 The eclectic, even eccentric musical tastes of German, Netherlands- based flute master Mark Alban Lotz may be attributed to his personal history. He grew up in Thailand, Germany, and Uganda, while studying jazz, contemporary music, and Indian bansuri flute playing in Amsterdam, New York, and Los Angeles. This globe-trotting biography is reflected in his flute solo performances of contemporary composed music and associative improvisations, all recorded in one go with no overdubs or sound processing.

Lotz is a musician who sees and plays the flute beyond its conventional instrumental characteristics. After all, the flute, any kind of flute, made of metal, wood, bamboo or PVC, is a pipe that transforms breaths and air through lip plates, blow holes, and keys. The inventive approach of Lotz with his wide array of extended techniques—whisper tones, multiphonics, tongue slaps and stops, circular breathing, voice, and lip pizzicato harmonics—turn these concise pieces into highly vivid, cinematic pieces.

Lotz meditates on distinct world music, jazz, contemporary music schools, and genres. The spare, Bedouin- tinged tones and overtones of "Aş Şaḩrā' ash Sharqīyah (Eastern Desert)" and later "Inside," using the bass flute, sound as paying tribute to flautist Paul Horn's sonic explorations of the acoustics of the Taj Mahal, and inside the Great Pyramid of Giza. Lotz, on these pieces, enjoys the kinetic qualities of the flute's sound within the acoustics of studio space. The PVC contrabass flute is employed on "PVC Mantra" to create a hypnotic, quiet drone. The charming "Piccolo for Makeba" sounds like a Lotz tribute to the Malagasy wood flute, sodina, and "Whisper Alap" and is a peaceful abstraction of the opening, meditative theme of an imagined Indian raga.

"Whole Steps" is a clever reflection on Eric Dolphy's flute playing, and in turn reflects John Coltrane's fast chord changes. "For Rahsaan" is a soulful homage to Rahsaan Roland Kirk's colorful, free spirit while "Major Circles" is a beautiful, contemporary composition. "Major Circles" and "A Fine Winter" are beautiful, nuanced contemporary compositions. The weakest pieces are the short explorations of the sonic spectrum of the bass flute's, "sound excesses" as Lotz calls them.

An arresting tour in the hidden worlds of flutes.