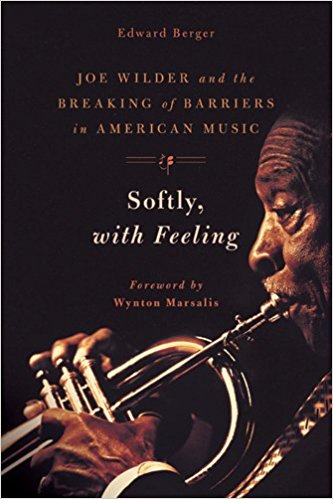 It's a long way from Darby Colwyn PA to Manhattan NY in more ways than one. There's an old Fels Naptha plant that has always seemed the pride of Colwyn, that is, until you know about Joe Wilder. Many of us discover him scandalously late in life, decades after our adolescent heroes are established. No, it wasn't just a matter of race, but that didn't help if you were a white kid. Wilder was self-effacing, not self-promoting, a famous gentleman not a horrible human being. He did not swear, drink or smoke. At least one of these, you supposed, was a prerequisite for being a trumpet player. Apparently not.

What Wilder did, in the face of formidable odds, was become a trumpet player's trumpet player. That is usually code for "obscure" or "unknown," but that was hardly Wilder's case.

Coming out of Philadelphia's Mastbaum High School (like Buddy DeFranco), Wilder, who had been a kind of kid trumpet phenom, was attracted to the classical repertoire. But as Edmund Berger observes in this perceptive and thoughtful biography, "a career with a major symphony orchestra was not realistic for an African American musician coming of age in the late 1930s and early 1940s." (p. 27) So slaving over Arban's method or not, Wilder had to make a living playing jazz and popular music. After time in the Marine Corps (1943-46), stationed in the Deep South, where he was trained for combat, not music, experiencing the customary run of dreadful racist incidents, Wilder paid dues in a number of big bands: Lionel Hampton, Jimmie Lunceford, Dizzy Gillespie, Lucky Millinder, Sam Donohue and Herbie Fields, where he replaced the redoubtable Doug Mettome who did indeed drink alcohol and use hard drugs.

Although emphatically not a high-note artist, Wilder increasingly found himself slotted as a lead player because he could read anything, possessed great facility, and had a sound that puts you in mind of Charlie Spivak, but more so. There was also for Wilder a brief, but personally significant stint with Count Basie during which he met his second wife. Although Wilder tended to downplay his improvisational abilities, he had become a melodic improviser of note.

Coming off the road in 1955, Wilder was the first black to sit first chair in a Broadway show, "Silk Stockings," a role he reprised in "Most Happy Feller." But for every barrier Wilder broke on Broadway, in the studios, or with a staff orchestra position, there was the inevitable ugly reality of casual racism, in the North, and everywhere else, was present. In Philadelphia, his home town, he was greeted with an opening night party invitation specifying "No Negroes or Japanese." That was polite. The N-word was everywhere.

Wilder's approach to this stuff was nothing, of not self-disciplined. He had been a Marine and he could take care of himself. He avoided confrontation by reminding himself that most white musicians he played with weren't racists. It took more guts to walk away from a fight than to get into one, and Wilder had guts, if nothing else.

While most of the biography is a detailed account of Wilder's pioneering role on integrating white orchestras or in making a dent in the ranks of classical players, it would be unfortunate to overlook his influence as an instrumentalist. Going back to the mid-1950s, Wilder made a series of recordings that were influential among trumpet players. One of these was Wilder 'n Wilder, his first album as a leader, which featured three ballads, a blues in three, and what Berger rightly calls a "stunning" version of "Cherokee." (1956)

Everyone probably has a favorite version of Ray Noble's warhorse. Ironically, until I heard Wilder's my favorite was recorded by Warren Vache, the player who arguably assimilated Wilder's style most completely, as Vache is quick to acknowledge. Wilder never states the melody, but embroiders an improvisation around it.The results are incredible, especially when you realize that Wilder never sold himself as a natural improviser. And when I listen to Wilder's The Pretty Sound, (1959), I can't suppress the thought that Don Fagerquist must have gotten as much from Wilder as Wilder did from Bobby Hackett. Influence is where you hear it.

As for classical playing, Berger notes that "Wilder had done an extensive amount of classical playing in the 1950s and 1960s, most of it... for live performance or in conjunction with his work on staff at ABC." (p. 213) The exception was an album recorded in 1964 on the obscure Golden Crest label, of which I have been able to find Wilder's recording of Alec Wilder's (no relation) "Sonata for Trumpet and Piano." Wilder, of course discounted his abilities as a classical player in comparison to Wynton Marsalis or to the extraordinary Russian, Timofei Dokshizer. I beg to differ. Alec Wilder wrote the piece specially for Joe. For sheer beauty, not to mention execution, it is a revelation, as Wilder plays both open and muted horn. The results are simply gorgeous, and not just proficient. Ask a player, especially about navigating the treacherous lower register of the trumpet as cleanly as Wilder did here..

There is all this and a lot more, including a memorable account of Wilder with Benny Goodman's disastrous 1958 tour of the USSR, Wilder's club dates, society orchestra playing, and much more.

This is an important account of a trumpet player whose career was in some ways a metaphor for race in a part of the music business that conspicuously was not associated with Afro-Americans. Listen to Wilder's recordings as you read it. It will be time well spent and effort amply rewarded.