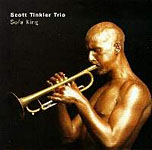 It’s a big test for a horn player: lead a trio with drums and bass behind you. You are the melody, the conceptual force: if the music is boring, the blame falls on you. It’s a challenge worthy of the very best – and typically the horn is a saxophone. It has a wide range and the notes can come fast – for another horn, the task is daunting. Scott Tinkler brings his trumpet into the fray – a modern sound unafraid of new territory. He is different, and the music better for it.

The drums come in hard, with walls of cymbals and iron snares. Tinkler enters with a jaunty line: his tone is round and he drawls his sliding lines. His laid back tromboning is at odds with the drumming, and yet it works with it. His tone gets harder, and his lines dart at angles. Adam Armstrong has a rubbery bass, sliding along the lower range of Tinkler’s notes. As Scott goes fast, he softens a little, but his tone is mostly there. His slides and broad vibrato make him distinctive. Armstrong’s solo is hard, with one great riff leading to another. Tinkler comps very softly as the pattern develops. One thing is clear: you can be the sole horn and not scream ‘til the end of time. You can describe it in one word: Authority.

Throughout the disc are examples of Tinkler’s slow power. “Subject to Non-Refundable Confiscation” (now that's a title!) is a worried walk through a very bad part of town. Armstrong slams a menacing bass, Simon Barker slaps the drums around, and Tinkler glows with the fury of the mean streets. Near the end it picks up steam: it sounds like Scott’s running, with the rhythm chasing him. Talk about painting a picture with sound!

Sometimes the slow menace works against them. “Magic Music Man” has a sad theme I like a lot – I hear this and imagine a hard-bop quintet. Not so: Tinkler starts and stops on the theme, and the band’s foot-dragging seems wrong for this tune. When Armstrong solo, Tinkler does more comping behind him; again it works. “A Moment in the Garage” would also benefit from a larger group: on the theme Armstrong does a comping part that would normally go to a piano. This is a mover, and when Tinkler gets going you can’t stop him. He slows; Barker picks him back up. There’s a cool moment where Armstrong plucks some tough chords – here the fake piano works. The interplay is great, and there are moments when this track reaches the intensity of Sonny Rollins’ Freedom Suite – and that is saying something.

The disc ends in fine fashion. “Southern Charm” takes a while to develop, but the payoff is a graceful fluttering by Tinkler; it goes on for a minute, and is a delight. He also gets some of his buttery slides in – it’s worth the wait. “Sofa King” starts with a sourball – Armstrong bows with a grainy sound, and Tinkler squeals with festering rage. The solos are a step down, but Scott has another great series of flutters. “Serendipity” has a nice walking bass and snaky menace from Tinkler. Again there’s the growl, and it’s put to good use. His solo starts gently; the drums get harder. Tinkler ducks and moves, wailing high in a rare moment. When Barker calms down, Tinkler slides a bit and comes to a halt. Armstrong’s turn is low and slinky, keeping the mood with low wavers. He gets into a walking pattern, and it slowly fades, getting so soft that the theme’s return is a surprise. It all makes for a different song – and from a different horn trio.

Both spur Tinkler to extended melodic explorations and ruminations on this series of seven generally shapeless palettes for improvisation. It's a heavy burden for the trumpeter to take on, extending improvisations of variety and dramatic force over the full length of the disc. But this disc never palls, and its overall effect is nothing short of extraordinary. This is improvised music of the highest order. Tracks: Mirror Mirror / Subject to Non Refundable Confiscation / Magic Music Man / A Moment in the Garage / Southern Charm / Sofa King / Serendipity Scott Tinkler (trumpet), Adam Armstrong (bass), Simon Barker (drums).