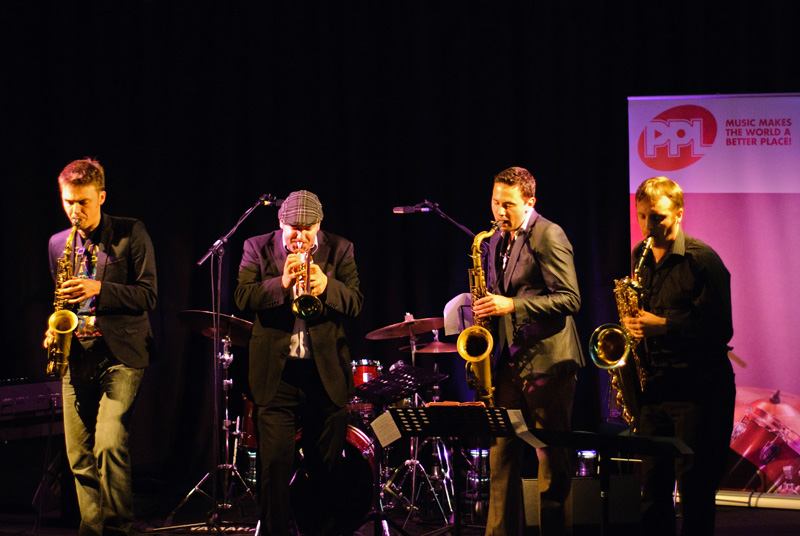 By BRUCE LINDSAY
July 29, 2011
Sign in to view read count
This edition of JazzLife UK starts about as far from Britain as it's possible to get in the USA without toppling head first into the Pacific. It returns to its spiritual and physical homeland of Norfolk, where it can happily hide from the real world until next time, and looks forward to a festival that combines music, literature and beautiful architecture. Then it pops into the Great Wen (thank you, William Cobbett) for a short visit to celebrate some jazz awards. Along the way there is good news, and just a teeny little hint of gloom.

Earlier this year, the excellent Oregon-based saxophonist Rich Halley released Children Of The Blue Supermarket (Pine Eagle Records). It's a fine album, even though it has no connection with the UK as far as I am aware. What it does have is the spoken words of poet Dan Raphael. The combination of jazz and the spoken word harks back a little, making me a tad nostalgic for the Jack Kerouac books of my youth. It also, coincidentally, started a wave of jazz-meets-another-creative-art set of experiences. Jazz met fine art—Daniel van Doom's superb portrait of saxophonist Courtney Pine, part of the BP Portrait Award exhibition at London's National Portrait Gallery. Jazz met animation—pianist Kit Downes' collaboration with artist Lesley Barnes at the Cheltenham Jazz Festival. As always, it met photography and cinema. And, of course, it constantly meets architecture, benefiting from and fighting against it in equal measure.

The association between jazz and the (other) creative arts is strong in the UK, but not always acknowledged by commentators who too often view jazz as some sort of "outsider" activity that exists in a strange artistic vacuum. It's ripe for exploration—and so it will be, in the next JazzLife UK missive.

The spoken word, the written word, architecture and jazz look set to meet in fine style at the end of August 2011, at the first Voewood Festival. The festival, billed as a "Literary Garden Party," will take place at Voewood House—a fine Arts and Crafts country house—in Norfolk. It's almost a local event for JazzLife UK and has much to recommend it as a festival without even considering the line-up: it's not in a field, it doesn't involve camping, and much of the activity will take place indoors, under a proper roof and surrounded by proper brick walls. 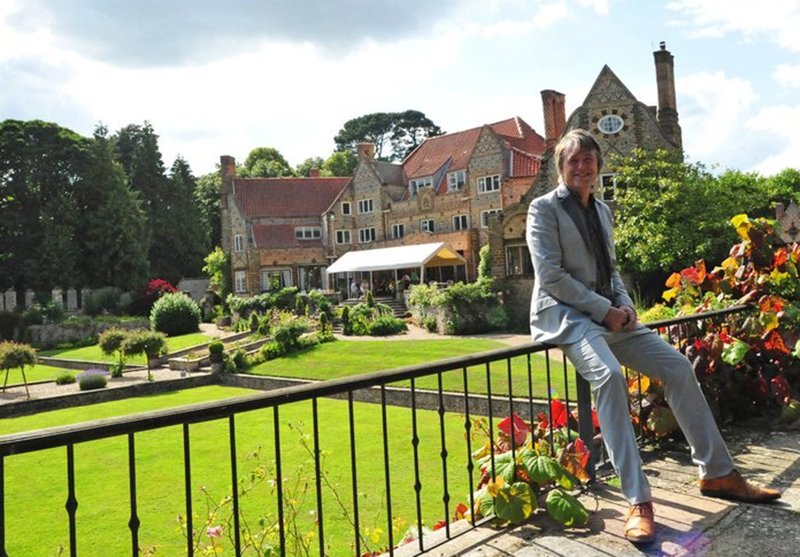 There is, of course, much else to recommend it. While the event is mainly focused on literature, featuring authors such as Louis de Bernières, Diana Athill and DBC Pierre, there is also a fascinatingly eclectic program of live music. Beth Orton, Adam Ant and Glen Matlock (ex-Sex Pistols) are all slated to play, but for jazz fans the most mouth-watering event will be the one featuring vocalists David McAlmont and Cleveland Watkiss.

You wait for ages, then three come along all at once. For it is Awards Season and jazz prizes have been flying thick and fast over recent weeks. The Parliamentary Jazz Awards, the inaugural Kenny Wheeler Jazz Prize and the Yamaha Jazz Scholarships have all been announced and demonstrate once again the breadth and depth of talent in the UK jazz scene, especially among its younger members.

The Parliamentary Jazz Awards are the UK's première awards for jazz, going to broadcasters, educators and venues as well as musicians. Jazz lovers vote for their favorites online and the shortlisted nominees and eventual winners are decided by an ancient occult process that goes back to the days of King Arthur, or something like that. To me the winners always seem to be a combination of the obviously deserving—including, in 2011, bassist Coleridge Goode, Brass Jaw (pictured on page 1), Dame Cleo Laine—and the somewhat puzzling.

Tenor saxophonist Josh Arcoleo became the first recipient of the Kenny Wheeler Jazz Prize, awarded to a new graduate of the jazz course at the Royal Academy Of Music. The prize will enable Arcoleo to record his debut album, to be released on Edition Records in 2012, and it's definitely well-deserved from what I've heard of his playing. Arcoleo also won a 2011 Yamaha Jazz Scholarship, along with five other newly-graduated jazz musicians: tenor saxophonist Riley Stone-Lonergan, pianist Chris Eldred, guitarist Nick Costley-White, double bassist Chris Hyson and drummer Jonathan Silk. The scholarships provide the musicians with £1000 each, plus a recording date and some much needed publicity.

All artists need publicity, especially at the start of a career. Without it, garrets and starvation may well await. These three awards certainly provide the winners with extensive publicity within the UK jazz scene, but the wider media, even within the arts, pay scant attention. Even the broadsheets, some of which have their own jazz critics, give the awards little if any coverage. It's a hard world. 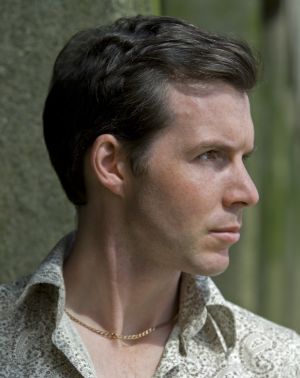 There is one annual music prize that does offer British jazz a brief moment in the spotlight. It's the Barclaycard Mercury Prize. Each year a jazz album is among the 12 nominated recordings, ensuring some of the best publicity possible even if the jazz album doesn't win the actual prize.

A jazz album has never won the actual prize.

This year's nomination from the British jazz community is pianist Gwilym Simcock's gorgeous solo album Good Days At Schloss Elmau (ACT Music, 2011). Simcock (pictured left) has created a beautifully crafted recording, on the cusp of European classical music but also incorporating powerful rhythmic elements, strongly composed but with some inspired improvisation. How will it fare? Difficult to predict, given that there is no discernibly consistent set of criteria by which the winner is judged, but it seems likely that jazz's proud tradition will be maintained. I hope I'm wrong.

It had to happen, I suppose. Bonhomie can only stretch so far before the awful realization that life is not a bed of roses returns to haunt the unwary. Something is wrong this month. A petulant, juvenile, snide and rather embarrassing tendency to insult and disparage seems to be prevalent in some corners of the jazz community.

It manifests in different ways but at heart there's a mean-spiritedness about it that does jazz, and the individuals themselves, no favors. Three examples. A bassist, during a radio interview, bemoans the "fact" that contemporary jazz guitarists "can't play chords." He's not interested in playing with these people, nor is he interested in listening to their music: he presents no evidence, attempts no explanation. A radio presenter with a late-night jazz show announces with pride that he's never heard a young female singer. He mispronounces her name, deliberately and with what sounds like contempt. Her main fault, as far as I can make out, seems to be that she's talented and popular but doesn't devote herself totally to the Great American Songbook. A horn player, on stage, makes a few comments about the fans of another very well-known singer which imply that such fans are stupid and uneducated. Given that this singer has a large fan base among university students and young professionals this would seem to be a somewhat ill-informed comment at best.

All three of these examples come from members of what might be called the "older generation;" the generation to which I also belong. The generation that is constantly telling the members of the younger generation that they have no manners and need to respect their elders. The youngsters are not immune—a glance at Twitter during any episode of X Factor (Britain's American Idol) will find a few of the jazz fraternity indulging in their own bouts of name-calling. I'm not immune—I have been known to get quite exercised about things from time to time myself—but I do tend to do so in the privacy of my own home.

I don't mind people moaning, and I'm a great fan of the well-crafted insult or the well-timed riposte. But much of the time these comments just sound like sour grapes, with more than a hint of the green-eyed monster. They also serve to perpetuate the idea of jazz musicians as a small, isolated and irrelevant bunch of individuals playing an isolated and irrelevant type of music, an idea held by many people of my acquaintance.

They're wrong. Jazz is a creative art, which constantly interacts with, learns from, and illuminates the other creative arts. Even in the UK. And the jazz community should be proud of that.

Meanwhile, the nights are drawing in again. So it's not all bad. 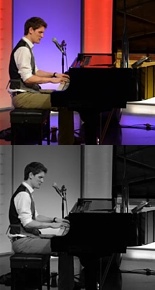 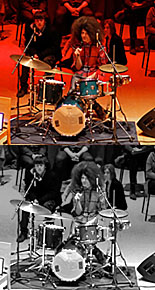