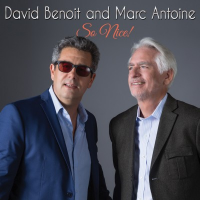 There's nothing particularly noteworthy in two established musicians collaborating. It's a tradition in jazz as old as the genre itself, so a pairing of pianist David Benoit and guitarist Marc Antoine is not a seismic event to knock the world off its axis.

What we have here is a marvelous meeting of like-minded musicians who are clearing digging dueting with a drum-tight supporting band. Emphasis on the word "band" because bands are a rare beast in contemporary jazz.

Instead of a revolving door of hardened studio pros parachuting in for a track or three and then disappearing into the ether, Benoit, Antoine and producer Bud Harner get it done in 40 minutes over ten tracks with only three other players and then they're over and out. The record is dedicated to the late and legendary producer, Tommy LiPuma and it is indeed a fitting tribute.

Everybody's paying homage to Antonio Carlos Jobim and here it's "So Danco Samba" where John "J.R." Robinson gets a chance to show off a little of his formidable drum skills, but it's Antoine who really takes flight here. His composition, "Rio Deluxe" is a lively workout with Antoine, Robinson and Benoit trading off while bassist Ken Wild and percussionist Luis Conte provide superb support.

That's the connecting cord of So Nice!. In a time where the majority of smooth jazz albums are revolving doors of musicians coming and going and there's no consistency from song to song, this recording avoids that trap. The quintet set-up forms a unity of effort and while nothing terribly complex or even all that original happens here. there's nothing wrong with a good, solid recording where everyone involved seemed to pull together to play great and have a good time doing so.

What this isn't is a super session where Miles and Coltrane square off for sonic supremacy. A&B are not bucking for a spot on the Mt. Rushmore of Jazz. What it is are two contemporary artists coming together to make some darn good music. Is it evolutionary or revolutionary? Well, no, but let's not overthink this. The pairing of Antoine and Benoit works, the band is cooking with gas, it sounds great, and it's a darn good record and that's never a bad thing.

So Nice checks all the boxes to make for a successful collaboration and it totally is.

About David Benoit and Marc Antoine