Roberta Gambarini: So In Love 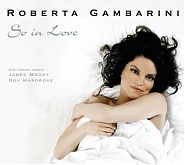 In his book The Jazz Singers: The Ultimate Guide, music writer Scott Yanow presents a list of the 30 most important jazz singers. One name most likely to join that group, Yanow believes, is that of Roberta Gambarini. Very quickly, this talented Italian singer has established herself as an artist to be considered seriously in the same manner that Anthony Benedetto, better known as Tony Bennett, is considered.

Born in Torino, Italy, Gambarini came to the United States in 1998 and that same year competed with Jane Monheit and Tierney Sutton for that year's Thelonious Monk Institute of Jazz Vocal prize. Gambarini is no stranger to recording, having digitally waxed previously well received You Are There and Easy to Love. In these recordings, Gambarini concentrates on standards. It's a dicey proposition considering how the jazz vocal market is clotted with such recordings, many of them good but not exceptional. So what makes Gambarini different? Gambarini's gift is the most illusive: a perfect, or at the very least, a near-perfect vocal instrument that currently has no peer.

So In Love continues Gambarini's survey of the standards with a couple of near surprises. Gambarini's influences are so legion, perhaps the better way to consider her singing is what elements from past singers she chooses to color her performances. "Day In Day Out" recalls Frank Sinatra and Ella Fitzgerald. "Crazy" suggests Patsy Cline, with a glass of wine, possibly a vintage Sangiovese (joined by Roy Hargrove on flugelhorn). "Estate" finds Gambarini firmly in her element, displaying her perfect instrument from the low to the high ends.

The The Beatles' "Golden Slumbers/Here, There and Everywhere" defines Gambarini as a vocalist who's no longer simply influenced but a future influence on others. She further establishes her considerable jazz identity with a sense of humor on Johnny Griffin's "You Ain't Nothing But a JAMF" to which she penned clever lyrics and provided the most wicked scat singing since Louis Armstrong goofed on "Heebie Jeebies" during the "Jazz Age" 1920s. Her instrumentation is the simple piano trio, better to display her considerable talent and ability. "Over the Rainbow" ends this fine recital on a golden note.

Joined by the likes of Hargrove, James Moody, George Mraz, Al Foster and Jeff Hamilton, Gambarini lives up to her Scott Yanow billing as the next important jazz singer. Gambarini emerges as one recalls what well-conceived and well-executed jazz singing can be.

So In Love; Day In, Day Out; Get Out Of Town; Crazy; That Old Black Magic; Estate; Beatles Medley: Golden Slumbers / Here, There And Everywhere; I See Your Face Before Me; From This Moment On; You Must Believe In Spring; This Is Always; You Ain't Nothing But A J.A.M.F.; Medley From "Cinema Paradiso": Main Theme / Song For Elena; Over The Rainbow.