Dwiki Dharmawan: So Far So Close 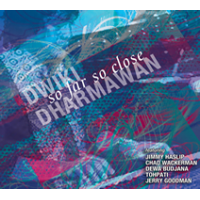 Keyboardist Dwiki Dharmawan is also a successful producer in Southeast Asia, yet this album signifies his debut for the estimable progressive rock and jazz fusion record label, Moonjune Records. And you couldn't ask for a more equipped and talented supporting lineup, including legendary Mahavishnu Orchestra violinist Jerry Goodman, appearing on the melodic and penetrating, classic fusion era type opener "Arafura."

The crystalline program was recorded in Los Angeles by contemporary jazz keyboardist Jeff Lorber, who engineered a detailed soundstage that among other niceties, accentuates Dharmawan's layered and multihued operational faculties. He inserts memorable hooks into his repertoire amid complementary elements, evidenced on the anthem-like and textural ballad "Bromo," featuring his fellow countryman and rising-star guitarist, Dewa Budjana's lush, distortion-packed soloing.

Dharmawan intersperses stately synth lines along with bassist Jimmy Haslip's robust fretless bass patterns and of course, drummer Chad Wackerman brings it all back home on several occasions with his brisk polyrhythmic fills. Another young future guitar hero from Indonesia is guitarist Tohpati (simakDialog) who performs on acoustic and electric guitars on three tracks. In addition, his trio album Tribal Dance (Moonjune, 2014) also featured Haslip and Wackerman laying down the fuzoid grooves.

"Jembrana's Fantasy" is the lengthiest track at 9 ½ minutes and where the keyboardist presents a global outlook, starting with a classical piano overture and overlays by I Nyoman Windha who uses indigenous percussion instruments and a bamboo flute, integrating a world music edge. Moreover, Dharmawan enlists a gathering of the troops motif via jazz improvisation and acoustic-electric shadings. He closes out the set with a straight-ahead jazz rock burner "The Return of Lamafa," revved up by Budjana's slashing and sizzling solo spot. Nonetheless, Dharmawan defines his artistry with insightful compositions and magnificent technical gifts. He's most assuredly one to watch.

Arafura; Bromo; So Far So Close; Whale Dance; The Dark of the Light; Jembrana's Fantasy; NYC 2050; The Return of the Lamafa.