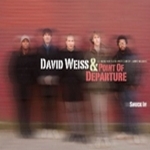 A keeper of the flame, but a resolute practitioner of forward thinking music, David Weiss has been active for more than twenty years in New York. His horn swings with élan, representing modern post-bop trumpeting whether playing in Charles Tolliver's Big Band, producing other recordings (Robert Glasper, Jeremy Pelt and Marcus Strickland), or at the helm of firebrands such as (Myron Walden, Jimmy Greene, and Dwayne Burno) in his New Jazz Composers Octet. Weiss is deep in this game and his abilities speak loud and clear.

His new outlet comes in the form of a live document at The Jazz Standard in 2008 with his Point of Departure quintet. Weiss continues to surround himself with vibrant young talent, this time with saxophonist JD Allen, a bright leader with his own trio (Shine! ( Sunnyside, 2009)); Nir Felder, a striking guitarist with an unusual phraseology; and the on-point rhythm section of in-demand bassist Matt Clohesy and Jamire Williams, an exciting drummer who can be heard on recent recordings by Christian Scott aTunde Adjuah and Jacky Terrasson.

The tracks consist of Weiss' heady repertoire taken from the 1960's. Herbie Hancock's familiar "I Have A Dream" (The Prisoner (Blue Note, 1969)) and obscure gems like Tony Williams' "Black Comedy" once recorded on Miles Davis' Miles In The Sky (Sony, 1968). Their treatment by these skilled musicians unveils new insights and innovative grooves that are as challenging as they were decades earlier.

Solace comes in the thoughtful reading of Andrew Hill's "Erato," the only track recorded in the studio. The title, another fine composition by Moore concludes the set. One that is replete with harmonic complexities and gripping performances by modern day jazz ambassadors. Snuck In is a powerful testament to the past and, even more so, the present.

I Have A Dream; Black Comedy; Number 4; Erato; Snuck In.