By BRUCE LINDSAY
August 1, 2012
Sign in to view read count 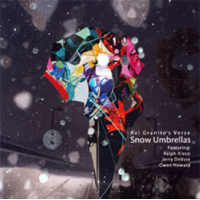 Snow Umbrellas is guitarist/composer Avi Granite's third album as leader, as well as the debut from his New York quartet, Verse. Released on Granite's own Pet Mantis Records, the album features trumpeter Ralph Alessi, bassist Jerry Devore and drummer Owen Howard on a set of Granite's original compositions that range from the free, improvised feel of "Four for 4" and "Tricycle Dreams" to more danceable tunes, via one or two gentle and romantic numbers.

"Y Not" gets into its danceable groove after a short and pretty duet between Alessi and Granite, with a few excursions into brief, rockier, phases. "Charlie's Shorts" has a similar feel, centering on DeVore's funky bass line. Together, they're the album's most upbeat and immediate tunes. In the musical middle ground are tracks such as "Like John," which ambles cheerfully along, its easy-going ambiance at first hiding the skilful interplay between Granite and Alessi.

"Wayne Winks At The Radio" opens with Granite's solo guitar—a rare example of the guitarist grabbing the limelight—before he moves over to let Alessi's trumpet take the lead. "Mortetia" also ambles, but DeVore's loping, repetitive bass and Howard's skittering cymbals give its movement a more threatening edge.

"Barnacles" is a surprise. The title suggests something rough-edged—a bit hard to grasp—but this is the loveliest composition on the album: Alessi's mournful, muted trumpet floats over Granite's simple, repeated guitar phrase and DeVore and Howard's oddly affecting rhythms to create a graceful and romantic tune.

Given the obvious talents of the musicians it's rather surprising that Snow Umbrellas is a relatively subdued affair, with the quartet seldom moving beyond mid-tempo and never engaging in any real musical excesses. On the one hand, this means that the flow and mood of the music is fairly constant, lacking a little variation. On the other, there is never any sense that the players are letting displays of technical ability triumph over their musical sensibility.

The album is described in the press release as a "modern audio-film." It's an odd and not especially helpful description, but the music readily stands on its own. Snow Umbrellas contains plenty of intriguing ideas and adept musicianship—enough to make Granite's future projects worth watching for.