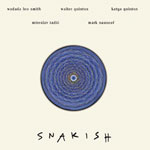 Of all the avant-garde players from his generation, Wadada Leo Smith easily ranks among the most insightful collaborators with electronic musicians. His willingness to include electrified lexicon in his musical language now yields Snakish, a surprising soundscape created with a band culled from the Cal/Arts faculty, including guitarist Miroslav Tadic and electrician Walter Quintus, as well as vocliast Katya Quintus and Mark Nauseef on percussion and electronics. The guitar, trumpet, and percussion juxtapose the electronic environments to create rainbows of color and textures, leading down surprising avenues of 21st Century music. As with much of Smith's work, space and silence share in importance with sounds generated.

The fourteen concise aural haiku begin with the dreamy "Uncoiling, which features Smith muted and musing with Tadic's understated guitar in a shimmering soundscape. Quintus quietly recites (in German?) as sparks rise. Nauseef's bell awakens "Cosmoil, Tadic runs muted strings through electro mist and processed Smith flares. The short atmospheric "Disembodyism gives way to "Over the Influence, with its ghostly train sounds and Smith's pointed declarations. "Yopo also begins with a bell, and Smith plays carefully chosen notes over the frothy hum around him.

With Quintus' ambient sounds crackling and rushing around them, Wadada Leo Smith and the Snakish band have tapped into the music of wonder.