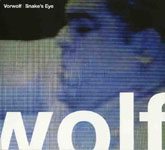 Vorwolf is the percussion duo of Michael Vorfield and Christian Wolfarth, hence the composite group name. Snake's Eye consists of seven medium length tracks, none over twelve minutes. The expectations of a percussion duo will be challenged as there are not too many rhythms or breaks here that could be sampled to form the basis of rhythm tracks. The musical dialogue, with the two firing out call-and-response phrases on a range of percussion—the call of "Shave and a haircut" and the response in "Two bits"—is a very twentieth century notion of a percussion duo. Vorwolf is definitely twenty first century and it crumples preconceptions.

The album title, track titles and cover photographs all make reference to Sumo wrestling. (The snake's eye is the raked area around the ring used to determine if one of the wrestlers has stepped outside). The reasons for this are unclear; those references could lead to an expectation that this meeting is a head-to-head battle or cutting contest—again, a very twentieth century idea of musical encounters.

So, having dispensed with any misconceptions, what do we have here? Although Vorfield and Wolfarth are both credited as playing no more than percussion, some of the sounds they produce defy those credits: as it is easily believed that they are employing extensive use of electronics; when a pure sustained tone rings out, it is tempting to think (or hear) an electronic tone; a moment's thought—and repeated listening—leads to the conclusion that many such sounds are generated from real instruments. For instance, by bowing cymbals to make them resonate or by twirling one of those long tubes percussionists sometimes deploy. Similarly, glitchy sounds that elsewhere would be electronic or from vinyl surface noise, seem to be produced by the collision of objects such as marbles or ball bearings.

Otherwise, most of the sounds here are from real instruments, although seemingly few were generated by straightforward impact with hands, sticks, or hammers. Instead, there is far more scratching, scraping, muted tapping and use of brushes—all of which produce a far gentler sound palate than normal for a percussion duo. Although they do not indulge in call-and-response, the two have good instincts about what to play—and when to play it—to complement and enhance each other. Overall, the music is both logical and satisfying. It is percussion, Captain, but not as we know it.