By MARK CORROTO
September 26, 2007
Sign in to view read count 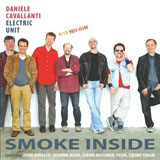 I've got this ringing in my ears! That's electric jazz, son; trust me, it's good for you.

Cavallanti's mission on Smoke Inside is accomplished with the aforementioned help of Tononi, plus the guitar of U.S. west coast hero Nels Cline. From the opener "Cline's Line, the guitar introduces a funk groove with Giovanni Maier's bass and the power-jam of the drummer. Cline and Cavallanti trade licks in this healthy anthem.

A tribute to the recently deceased saxophonist Dewey Redman, "Moods for Dewey finds a relaxed groove swept by the very large sound of Cavallanti's saxophone. He plays sans self-consciousness, not unlike Sonny Fortune. Cline is featured on one of his otherworldly guitar flights on "Fabrizio's Mood. Backed by the whirling Tononi and Maier, he rips, tears and crunches as introduction to some outward playing by Cavallanti and the keyboardist Ivano Borgazzi. The lengthiest track, a nearly twenty-minute "Ahimsa, rings of an early Wayne Shorter/Joe Zawinul vibe.

The slow-walking blues of "Go on Moses ends the disc. A certain crowd pleaser, the band evokes an old-time organ sound behind the guitar/saxophone sign-off.

It is, indeed, good for you.