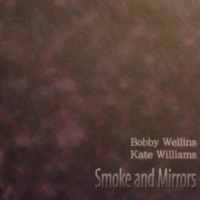 A title such as Smoke And Mirrors suggests there's trickery afoot: musical shortcuts, electronic skullduggery and all manner of subterfuge. There isn't: this is simply 45 minutes of beautiful acoustic music from two talented players who are, without wishing to sound too clichéd, in perfect harmony.

Tenor saxophonist Bobby Wellins has been one of the UK's major jazz instrumentalists for over 50 years (he first recorded in 1956, aged 20). He is still a vital member of the UK music community: an achievement recognized by the award of Musician Of The Year in the 2012 Parliamentary Jazz Awards. Pianist Kate Williams is an innovative composer and instrumentalist whose Septet gained a nomination for Jazz Ensemble Of The Year in the same awards.

Although this is the first recording by the Wellins/Williams duo, they have worked together many times and their affinity towards each other is clear in these performances. They recorded this album on the 17th of November 2011 at the Crossley Gallery in Halifax, Yorkshire—an unusual venue but, on the evidence of this album, recorded by Andrew Cleyndert who coproduced with Williams, it's one that provided superb acoustics.

Williams' solo performance of her own "What If..." is graceful and affecting, but it's when she and Wellins perform together that this album reaches its musical heights. The opening bars of "Smoke And Mirrors," one of three jointly composed tunes on the album, set the standard: languid, relaxed interplay between tenor saxophone and piano that has the effortless ease that can only come from players in total command of their craft.

The duo's crowning glory is in its interpretation of two standards. On Antonio Carlos Jobim's "If You Never Come To Me," Wellins' tenor is to the fore, his reedy and warm tone perfectly suited to the romantic melody. For George Gershwin's "The Man I Love" Williams creates a gently swinging rhythm over which Wellins plays the well-known melody straight, with little embellishment; a masterful reminder that "less is more" is a wise philosophy.

It's quite possible that Wellins has never played an unnecessary note. Williams is also savvy enough to know that showy displays of quick-fire technique should never take precedence over the music. So Smoke And Mirrors is an outstandingly calm and calming recording; never threatening a sonic explosion—it doesn't need to—it just glows, giving out a warmth and a charm all its own.

Smoke And Mirrors; While We Were Young; Minor Pennies; What If...; if You Never Come To Me; The Man I Love; P.S.; Imagination.