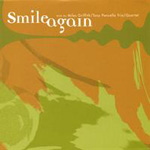 In the vein of notable names such as Jon Hendricks, Al Jarreau and Kurt Elling, jazz vocalist Miles Griffith has a resounding presence filled with earthiness and panache. For his second release, Smile Again, Italian jazz pianist Tony Pancella and his trio/quartet join him for a rousing venture of traditional and modern compositions.

Griffith's developing art form has been witnessed on recordings by Jimmy Heath and Wynton Marsalis, and most recently on Nick Russo's Ro. But his distinct scatting and vocalizations, which have been described as "scatolicious and likened to "Satchmo on steroids, really make him stand out as he entertains and exhibits a tremendous level of improvised technique.

Covering the sounds of mainstream and modern jazz, the album literally takes flight with "Arioso (Take Flight And Be Free), where Griffith provides warm and colorful lyrics, and the band swings divinely. From the urban/rural reflections of "Life in The City to the dark clouds of "Here's That Rainy Day, the vocals and the music cover a broad area of moods. The band is also tight, as on "Domingo, where Pancella's trio delivers impeccable timing and solos, and Griffith provides his own vocal instrument.

The time-weathered classic "Autumn In New York and the earthy ballad "Smile Again are both warmly inviting, but there are also free exploits on "What Is That Beautiful Sound? and "Too High," where Griffith mixes strange vocal sounds and the band offers dissonant lines. The recording closes with the spirit-lifting "Something Special, which lends a warm glow to the set. Griffith is definitely one to watch and listen for, and this aptly titled release may indeed give listeners something to smile about.

Arioso (Take Flight And Be Free); Life in The City; I Mean You; Here's That Rainy Day; Domingo; Autumn In New York; What Is That Beautiful Sound?; Too High; Smile Again; We See; Something Special (In The Sky For Us).