Smalls Jazz Club: Live and So Much More 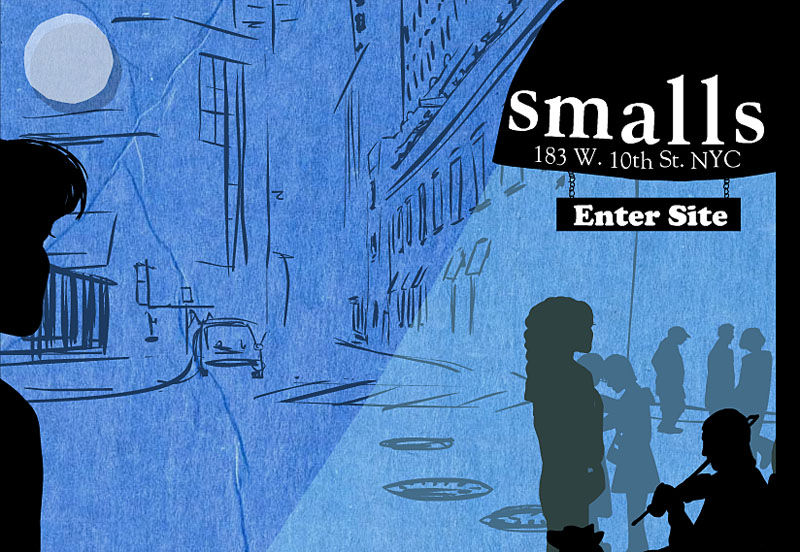 By MARK CORROTO
December 28, 2010
Sign in to view read count
After a few minutes talking with pianist Spike Wilner, Charlie Parker's quote about authenticity in music comes to mind: "If you don't live it, it won't come out of your horn..." Actually, the entirety of Bird's thoughts best captures the art of Spike Wilner. Bird goes on to state: "They teach you there's a boundary line to music. But, man, there's no boundary line to art."

Wilner doesn't seem to have any boundary lines these days. The pianist-turned-club owner, jazz scholar, record label entrepreneur, and internet presenter has embarked on an ambitious concept to present jazz to a worldwide audience, from a club with a capacity of just fifty persons. Smalls Jazz Club, in New York City's West Village, opened in 1994, and quickly became a musician hangout and a place to find great music until first light of morning. A regular performer from the start, the pianist called the club, "a wild place, sometimes a free-for-all." Because it had no liquor license, customers toted their own, and often the place was "not an optimal performing experience."

Today, with an affordable cover ($20 before midnight and $10 after), Small's has become a go-to listening spot in New York—much like, Wilner explains, "the former Bradley's or Village Gate, because we maintain a comfortable and informal atmosphere." Since Wilner became a co-owner in 2007, the club has upgraded the piano to a Steinway and begun recording and archiving all performances. Consider for a moment, the depth and the breadth of such an archive. Like old-time radio broadcasts, Small's documents the live performances from hundreds of artists such as JD Allen, Mark Turner, Fred Hersch, and Jon Irabagon, captured nightly for the past three years, with plans to archive all future shows.

Wilner explains that he is "a scholar and an archivist by nature," and it appears the musicians—about 95% of whom have given him permission to record, archive, and live-stream their performances via the internet—understand that, in the 21st century, the rules for recording and presenting jazz have been blown away. Listeners from around the globe, something like 27,000 per month, tune in nightly to listen to (and watch) live jazz or to search for an individual musician's bio and performance dates. Others can search the extensive database and audio stream unedited, live recorded performances from the archive.

Wilner has also founded the Smalls Live label, to make physical CDs available from the archive. He approaches an artist, say drummer Ari Hoenig (who led his group at the club in February 2010), and asks him to choose all the music from the date to be mastered by an engineer to a hard copy CD, or iTunes download. The 14 live discs produced so far—featuring artists like Jimmy Greene, Ben Wolfe, Omer Avital, Eric Alexander, Ethan Iverson, Albert "Tootie" Heath, and Peter Bernstein—have received critical acclaim. There are several more in the works for 2011, including dates from Chris Potter and John Patitucci, and also Louis Hayes and Jeremy Pelt.

Interestingly enough though, and to his surprise, Wilner's own release, Solo Piano Live At Smalls (2010)—a recording culled from his performances this past summer—has been met with popular success. In fact, the first printing of the CD sold out. Wilner's performance is rooted in the stride piano tradition of James P. Johnson, Art Tatum, and Fats Waller. He describes the CD as a recording "off the beaten track as a concept recording." Wilner chooses to play with old tunes and ideas in an ageless, yet modern "straightforward and melodic manner," to just, as he states, "swing." Indeed, it does. The disc has the feel of the wee small hours, when a player is playing more for himself than the small crowd left in the club.

While amassing, perhaps, the best and most complete catalog of working New York City jazz musicians, Wilner is also forging a new path for jazz. This fall he met with several major record companies, who admitted to him that "everything is falling apart," as far as the traditional approach to marketing jazz recordings. Perhaps Wilner's approach—a universal concept of club performance, video and audio streaming, and producing select music CDs—may be the best way to capture a new audience for jazz, while satisfying the needs of audiophile collectors.