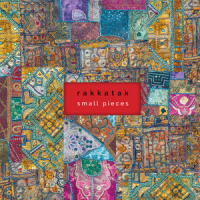 The Indian sitar literally burst upon the Western popular music scene when George Harrison, of The Beatles, first played it on "Norwegian Wood, (This Bird Has Flown)" in 1965. This recording brought about an unprecedented interest in Indian music and musicians, as well as the accompanying culture and religion, which Harrison openly embraced. So, it was a pleasant surprise to see this song presented on Small Pieces, the current release by the world music group Rakkatak. It's as if the sitar, the tablas, and Indian music in general, has gone full circle; currently being embraced by a new generation of musicians seeking broader creative endeavors.

Rakkatak was founded, and is directed by tabla player Anita Katakkar, a Canadian, of Indian descent. Her affinity for the tabla led her to serious study in India, and for ten years was a member of the Toronto Tabla Ensemble. With the addition of bassist Oriana Barbato and sitar player Rex Van der Spy, Rakkatak has taken Indian music into another dimension, blending jazz and rock into the mix while adhering to the Indian tradition. Indian music is based on the taal, or time meter, which defines its characteristic rhythm. Katakkar's clever utilization of the taal, in its many variations, is at the core of this bands ability to make instruments, which are hundreds of years old, sound fresh and innovative.

The opening medley commences with Van der Spy playing sitar in a classic Indian mode before slipping into "Norwegian Wood," with the ingenious bass fills by Barbato adding a modern abstraction to the piece. Vocalist Samidha Joglekar, begins "Dreaming," singing a compassionate chant, joined by the exotic santoor of Sina Bathaie, the number seeming to hang suspended in an act of musical meditation. Van der Spuy returns on "Heliosphere," this time his sitar more aggressive, as the tempo rises to allow violinist Jessica Deutsh to improvise among the higher registers. Drummer Randolf Jimenez is added on this, as well as several other tracks, proving to be a valuable asset in music that emphasizes intricate rhythmic deviations. Note: The heliosphere is the immense magnetic bubble containing our solar system, solar wind, and the entire solar magnetic field. It extends well beyond the orbit of Pluto

ADVERTISEMENT
Being Canadians, it's no surprise that the group would cover Rush's "YYZ," as they felt that the song's odd time signature and drum orientation would be a perfect fit with the Indian taal rhythms. "Eesha's Song," is dedicated to the passing of a child, and the song has the feeling of an uphill climb, filled with restless anticipation and slight despair. The fires which ravaged Western Canada in 2015 were the stimulus for "Rain After The Fire," a soothing ballad depicting relief and optimism in the wake of a major disaster.

As religion is a primary element and source of inspiration in Indian music, vocalist Samidha Joglekar contributed the lyrics to "Thoughts Of You," in honor of Lord Krishna. She offers her praise in English, yet her phrasing and delivery are purely from the Hindu school of devotion. Katakkar returns to her early experimental period on the closing "Riffing On 9," an electronica/beat nod to the Asian Underground movement.

Indian music has been a source of influence not only in the popular rock genre, but jazz masters as John Coltrane were attracted by its sophisticated requisite of dedication, leading to a path of higher consciousness and musicianship. Rakkatak plays Indian classical music with a Western approach, maintaining the original reverence and intent; yet bring the vitality and emotion of youth into their presentation, with inventive and positive results.