By JOHN SHARPE
December 7, 2017
Sign in to view read count 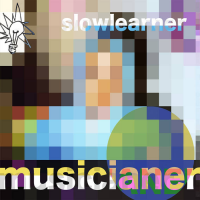 With Musicianer reedman Josh Sinton adroitly shows how to combine the abstract and the earthy. It helps that he has enlisted long time associates drummer Chad Taylor and bassist Jason Ajemian to realize the eleven compositions on the group's debut Slow Learner. Taylor, who first garnered international attention in the Chicago Underground Duo (etc) with cornetist Rob Mazurek, confirms why he has become an in demand accomplice since moving to New York, while Windy City denizen Ajemian has also entered Mazurek's orbit, teaming up with Taylor numerous times as a consequence.

"Outside (Today)" points up at how Sinton achieves his singular synthesis. Although it begins with indeterminate squeaks and knocks from bass and percussion, Sinton adds increasingly more emphatic two note blasts. When they reach critical mass, the unit slips into something down and dirty many miles from their point of origin. Once Taylor establishes a crisp back beat, the reedman posits an upper register counter theme before the weather turns blustery. Similar marriages of opposites surface throughout the program, and the easy movement between the modes, in and out of interlocking cadences, affirms that this is a fiercely focused entity.

Sinton hits a range of moods sometimes even within a single cut, as evidenced on "Sunday's Rehearsal" which alternates between shimmering vibes accompanied by lightly etched baritone, and an assertive tattoo which fuels Sinton's bittersweet musing. While largely configured as an ensemble music, Sinton's charts integrate occasional solo breaks into the flow. Taylor enjoys a short bouncy interlude on the nagging surge of "Pork Bueno," while Ajemian fingers a series of staccato rising and falling phrases on "Devoid Of Form, Devoid Of Meaning." That same track also further demonstrates how powerfully the constituent parts fuse when they converge onto a juddering unison. Sinton's righteous wailing is the icing on an already wholesome cake.