By BRUCE LINDSAY
December 24, 2012
Sign in to view read count 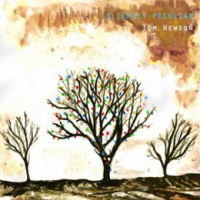 Pianist Tom Hewson didn't set out to make a solo piano album; it's just the way the nine original compositions which grace Slightly Peculiar turned out. At least that's the way he tells it. The story suggests that Hewson is a rather self-effacing chap—he could just as readily have spun a tale of grand schemes and master plans. The music tends to support this perception. There's no showboating, no outpouring of virtuosity for its own sake, nothing to frighten the horses. There's none of that. But it is beautiful.

Hewson was a finalist in the inaugural Nottingham International Jazz Piano Competition in 2008 at the age of 23 and is a key member of London's e17 Jazz Collective. His up-and-coming piano/bass/vibes trio Treehouse takes its influences from players such as bassist Dave Holland, reed player Jimmy Giuffre and the Claudia Quintet. Slightly Peculiar, however, finds Hewson the soloist taking inspiration from Bill Evans and Olivier Messiaen, as well as from the English countryside where he grew up, and his sister Kate's artwork, which adorns the cover. He's written that "The autumn is where this music belongs"; much of it does certainly conjure images of rural autumnal calm, but the sweep of this music goes well beyond any single season.

The opening trilogy of "In January," "In June" and "In November," has a distinctively seasonal feel, as befits its titles. "In January" evokes the isolation of icy winter days, alone but not lonely. "In June" is full of bustle and energy, Hewson's left and right hands busy with fast, energetic, lines. "In November" has a more contemplative atmosphere, its closing staccato chords suggesting the onset of another winter.

The remaining tunes range from the softly romantic "For Her" and "Sunsong," to the jumpy "Blues For Lockjaw" (most likely a tribute to Eddie "Lockjaw" Davis rather than an ode to tetanus) which mixes bop-influenced patterns with an angular rhythmic style. "Slightly Peculiar" sits midway between these two extremes; fluid and graceful, but cerebral rather than passionate. "As Ever" occupies the middle ground as well, but with a more percussive approach and a mid-section that shows Hewson at his most assertive. "The Woodpeckers" crafts its sound portrait of the titular birds at work and play with gentle good humor.

The recording, by Hewson and engineer Josh Kemp, is impressive. The piano sound is clear and resonant—recorded at Potton Hall, in Suffolk on a piano selected by Vladimir Ashkenazy. Hewson makes the most of the quality of the instrument and the venue, with Slightly Peculiar a fine solo debut from this talented player and composer.

In January; In June; In November; The Woodpeckers; For Her; As Ever; Blues For Lockjaw; Sunsong; Slightly Peculiar.