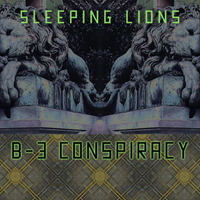 There's something magnificently earthy and earth-moving about the sounds emanating from a Hammond B3 organ, especially when it's in great hands. Marvelous players such as Jimmy Smith, Dr. Lonnie Smith, Richard "Groove" Holmes and Joey DeFrancesco lead the B3 parade. B3 Conspiracy's Sleeping Lions is a doubly delicious dose of organ-driven jazz: not only is there Bill Callanan's fine playing (deserving to be listed with the aforementioned), but the CD gives props to organ/soul-jazz stars Jack McDuff and Les McCann by including four of their classic selections.

This solid, swinging quartet of Las Vegas all-stars—all uprooted "Jersey Boys"—delivers an energy and drive that springs from the keys of Callanan's Hammond. And, the hard funk of the McDuff and McCann tunes is the perfect platform; the conspired result is a straight-ahead blues-blast.

All three elements of leader Callanan's playing—that wicked right hand, the restrained and timely comps and driving bass—reign supreme. Tenor saxophonist Thom Pastor and guitarist Hap Smith—like Callanan and Testa, veterans of the Vegas showrooms—work superbly in tandem to give grit throughout the set. Pastor's hard-charging tenor plays soulfully with intensely swirling extended lines, demonstrating a brilliant knack for ending his flowing ideas at the perfect time with perfect inflection on "Luny Tune." Smith, up to the task at hand, embraces the best of the jazz guitar tree, playing with shades of Joe Pass, Wes Montgomery and Grant Green on "A Night in Tunisia," his funk-feel and deft rhythmic and melodic senses sparkling in tandem with Callanan. Testa keeps things cooking on "One and Eight," by guiding and prompting perfectly behind both the ensemble and soloists.

There's a pervasive sense of play and relaxed cool combined with high performance energy across the date, probably owing to the fact that the session was recorded live in concert though, Testa's drums seem a bit under-recorded, perhaps for that same reason.

Sleeping Lions is a marvelous and most enjoyable homage-a throwback to the greatest of the organ-led groups of the 1950s and '60s. No pipe-dream, it roars ahead.

A Night in Tunisia; Luny Tune; A Real Goodun'; Once in a Mile; That Healin' Feelin'; One and Eight; Not 'nuf McDuff; Vas Dis.