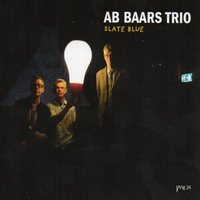 There used to be something about the Dutch jazz scene that made it stand out from American jazz, British jazz, and well, other European happenings. The "New Dutch Swing," to borrow the title from Kevin Whitehead's 1998 book, comprised an irreverent brand of music making, with little regard to tradition. Dutch players leaned heavily on Dada and absurdism as a counterpoint to the American tendency to regard jazz as a classical art form.

I say there used to be a difference, because you see, Americans (and Europeans) are adopting that same Dutch swing. You can hear it in the music of Chicago's Ken Vandermark, Norway's Ingebrigt Håker Flaten, London's Jazz Composer's Orchestra, and the Italian Instabile Orchestra.

Always somewhere near the center of the Amsterdam jazz scene has been Ab Baars, Wilbert de Joode, and Martin van Duynhoven. Their longstanding (some 25 years now) Ab Baars Trio always produces delight in the form of curiously inquisitive music. Slate Blue was recorded live, although the audience is not heard, at Splendor Amsterdam performance space. Baars tells us that the music was inspired by French composer Olivier Messiaen.

Baars always keeps one foot in the improvised world and one in the chamber music realm. Is it the clarinet? Could be. The probing investigatory nature of the trio's sound is evident throughout. "Hout" is a chivvy piece that has Baars' clarinet searching the off-kilter rhythms and unbalanced harmonies. His clarinet work shares the spirit of the late John Carter. Each piece here is taken from a slightly skewed perspective. Baars' clarinet sews the Chamber improvisations and his tenor saxophone lends itself more towards a jazz dialect. Pieces like "Water," "Kauw," and "Raaf" are solid avant saxophone trio pieces, with the latter performance as energized and outward as a Mats Gustafsson performance. The take away here is the interplay of the musicians. Wilbert de Joode's bass and Martin van Duynhoven's drums sound hardwired to Baars' every gesture. The excellent sound captured here reveals every clink, clank, clang, pick, plunk, and thrum of an intense listening improvising trio.