By JAKOB BAEKGAARD
September 24, 2017
Sign in to view read count 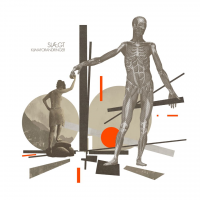 Once again, they explore their own original brand of Danish haiku-like poetry, hypnotic afrobeat-riffs and kitchy synthesizer landscapes mixed with acid rock and psychedelia. There is an ethical undercurrent in the texts that try to negotiate a position in the world where things are not seen in absolute terms, but rather in an open, humanistic perspective, hence the title "genus" as a statement about human relations.

The skepticism towards binary positions is also highlighted in the music that deconstructs such oppositions as western music and world music and arrives at a new position in-between. The topics also change between the serious and the silly. "Verdenshjørner" (Corners of the World) speaks about "these eyes who call for me" as a reminder of the people around the world that can't be ignored, but there's also the less serious statement about drinking tea and partying on a Sunday on "Søndagsfest" (Sunday party). Somehow, the sacred and the profane, the serious and the silly, mix on an album that believes in art as a genuine opportunity for changing the perspective on the fixed positions in the world.

A note: The LP does not include any lyrics and there is no information about the instruments played, but it is pressed on beautiful orange vinyl.