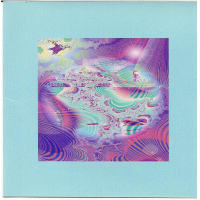 This is the debut Darshan Ambient disc, (that I know of), and it offers a glimpse into his growth, seeing as I recently reviewed his latest 2000 release. He achieved a fine creation in his Autumn Light CD that is a must have for melodic ambient fans but what of his older works? Read on.

The title track is a 21:48 breathy, ethereal, sacred symphonic style of ascending, orchestral, dreamy synths (think Demby) laced with loops of and repeating patterns of various sounds (some synth-voice) droning and cycling all about – channel to channel – phased and flanged. Parts are very relaxing but the myriad embellishments serve to awaken any neurons that may have just reached “rest state”.

Next up is a short Vangelis sort of bouncy keys “horse gallop” paced, atop synthbeats, sequenced like a satellite beacon, and progressively more keys come a-dubbed to accent the lite amb jam. This reminds me of Vangelis’ Direct meets T. Dream Optical Race. Melodic synth ear-candy and a brainy snack–of-fun, but not too deep on the inspirational level Darshan Ambient can create.

“Infinite Space” weaves a 19:50 journey of at first space music synthscapes of extreme minimalism and builds very slowly into sequenced beats that are like a cosmic choo-choo train drifting past the Milky Way and eventually things become very Euro-dance techno-electronica. Groovy bass lines drift in too. This would be perfect for the “chill out” room’s final track before jumping back into the dance groove zone. But for my overall beatless ambient tastes it distracts a bit. It is well done nonetheless.

“Gently, Gently Away” is a strong foreshadowing of what is to come in later Darshan releases – a perfectly, perfectly, yes, perfectly splendid saunter of melodic ambience for 10:53 of bliss. String synths, harp-like voicings, electric piano sonorities melt away all stress and fill the soul with light and peace. A mournful solo synth flute/reed song drifts above it all like a bird crying across a lake of mists and morning calm. This is a wonderful outro to this strong release by Darshan Ambient.