By JERRY D'SOUZA
December 3, 2012
Sign in to view read count 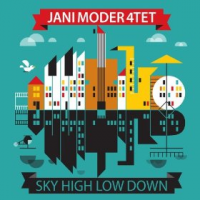 Guitarist Jani Moder brings an array of styles into play on Sky High Low Down, with a sense of accomplishment that never lets the movement or the mode get ahead of his field of vision. He carries his art into bop as easily as he does into a ballad that coaxes a rainbow of soft colors from the song's harmonic folds.

The quartet gets off to a lively start with exuberance on "Exhale." The hint of a Latin melody coalesces into upbeat funk driven by saxophonist Jaka Kopac, before Moder brings in some thick notes that soon slip into bop. Moving the tempo up while keeping the momentum loquacious, the guitarist then loosens a flurry of juicy notes. What makes it all the more interesting is the hardier métier that Kopač injects to extend the composition's organic grasp.

Interplay casts a warm glow on "Blueish." Moder is introspective casting space judiciously before changing the trajectory with a charged locution that electrifies the atmosphere. The blues find its vent as organist Erik Marence lays down a soulful terrain, washing it in soaring notes and in the transposition of the melody into inventive shores. The detail is rich, as drummer Klemens Marktl tingles on the cymbals and hits a deep groove to drive the beat.

The jumpy, effervescent "Mixed Emotions" is set into motion by Moder. After he works the changes under the saxophone, the guitarist comes back to let his instrument sing and romp as he unveils the melody. Moder lays the framework of his skills on the line as he seamlessly essays changes across a mellifluous and impressive tonal range.