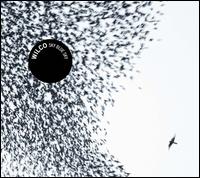 Wilco's Sky Blue Sky belies the stark black and white of its graphics. It's music of pastels, seemingly designed to lull the listener into a false sense of security.

Consider the fact it was recorded with the lineup of the band including guitarist extraordinaire Nels Cline, who brought so much expansive texture to the sextet's tours since joining in 2004. "Shake It Off reminds why he is such an integral member of the group. Yet for the most part he, like the rest of this road-tested unit, becomes faceless on this CD for its duration, sublimated to mere accompaniment for Wilco front man and founder Jeff Tweedy

The one-time co-leader of alternative country pioneers Uncle Tupelo (side-by-side with the brilliant leader of Son Volt, Jay Farrar) writes lyrics such as those on "What Light, containing alternately feel-good aphorisms and almost terminally introspective insights, the sum of which are anything but the universal likes with which a listener might identify. Always somewhat insular, Tweedy now seems never to look outside himself and when he does on "Please Be Patent with Me " or especially "You Are My Face," all he sees is a reflection. A marked exception is this title song, which pivots on an irony rife with latent violence.

Tweedy's main asset has now become his voice. The way he sings is tremendously affecting as he sounds almost childlike in his vulnerability. How much more affecting would his vocals be, though, if more often they were contrasted with the instrumental work around him, which might allow the listener to reflect on what's just been sung. "Either Way is a prime example, especially as Karen Waltuch's viola and violin—bookending the CD and appearing less prominently through the conclusion of "On and On and On—would lend itself to such an effect.

Sky Blue Sky is nevertheless deceptively insinuating, almost intoxicating to listen to. Its impeccable sound quality alone is worth doting on, as the individual instruments resonate off each other beautifully. And the arrangements of tracks such as "Shake It Off (a concession to visionary percussionist Glenn Kotche?) and "Hate It Here remind of nothing so much as latter-period Beatles. The halting time stops, prominent piano work and, again, Cline's eccentric guitar flourishes, as blended on "Side With the Seeds, aren't exactly derivative of the British icons circa Abbey Road (Capitol, 1969), but the influence is unmistakably there.

It's a facet of Wilco's collective personality all the more attractive for a generation of listeners twice removed or more from direct experience of that pop mega-phenomenon. Right now Tweedy sounds a combination of Lennon (in his sloganeering self-help solo days) and McCartney (the artful tunesmith with little if anything to say other than how he turns a melodic phrase). Consequently, Sky Blue Sky becomes the first Wilco album that sounds too careful for its own good.

Either Way; You Are My Face; Impossible Germany; Sky Blue Sky; Side with the Seeds; Shake It Off; Please Be Patient With Me; Hate It Here: Leave Me (Like You Found Me); Walken; What Light; On and On and On.