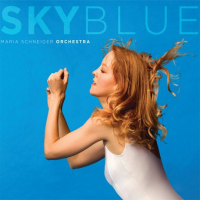 It will be very surprising if Maria Schneider's Sky Blue is not named as one of the most treasured albums of 2007. The album brings together the teachings of her mentor, Gil Evans, and, to some extent, the sweeping panoramas of Aaron Copland into a majestic orchestral setting. There is no question that Schneider's contributions as a composer have never been so important, with these compositions inspired by her real life experiences, and performed by the ensemble of the Orchestra and selected soloists.

Schneider has packaged her own product on the ArtistShare label far more attractively than the average new jazz release, in a handsome digipak format. In the notes, she tells the "big picture" of the album and compositions. In a separate section, she details her "thank yous for each composition.

The album begins with a masterly bit of storytelling based upon a childhood experience of Schneider's, with flugelhornist/trumpeter Ingrid Jensen duplicating this long ago event. Jensen begins with just rhythm behind her, but midway through her solo the full orchestra plays magnificently, while Luciana Souza's vocalese soars in the stratosphere. Jensen utilizes some electronics, along the lines of what Jane Ira Bloom might do, but milder and, at one point, everything seems to halt, as if awaiting the next step from Schneider.

Schneider's next port of call is Peru, a carryover from interests on Concert in the Garden (ArtistShare, 2004), and most notably the examination of "Aires de Lando," with Scott Robinson's clarinet work featured along with the Peruvian cajon, played by Jon Wikan (Ingrid Jensen's husband).

The nine-minute "Rich's Piece" was specifically written for saxophonist Rich Perry, who is featured on tenor sax throughout. Perry's thorough immersion and beautiful playing both soar and recede without overpowering the orchestra.

The centerpiece of the album is the nearly twenty-two minute "Cerulean Skies," echoing Schneider's hobby as a birding enthusiast. The composition begins with Perry, Jensen, Schneider, Robinson, trumpeter Jason Carder and others imitating bird calls on their respective instruments. When the composition does begin, the first of three soloists, tenor saxophonist Donny McCaslin, takes a lengthy solo in which he plays in a jagged, post-Coltrane fashion. It may reflect the written portion but Perry's approach would have been preferable. Then accordionist Gary Versace, who is a great colorist on his instrument, uses a variety of shading to much more appropriate paint a picture so that altoist Charles Pillow can conclude the composition. Aside from the featured players, there are waves of remarkable music from the orchestra, which plays almost in a classical sense (i.e. Copland's Twentieth Century music), instilling that the soloists should go forth.

The shortest of the compositions, "Sky Blue" is a wonderful opportunity for soprano saxophonist Steve Wilson to provide an enchanting solo that brings the album to an altogether fitting ending.