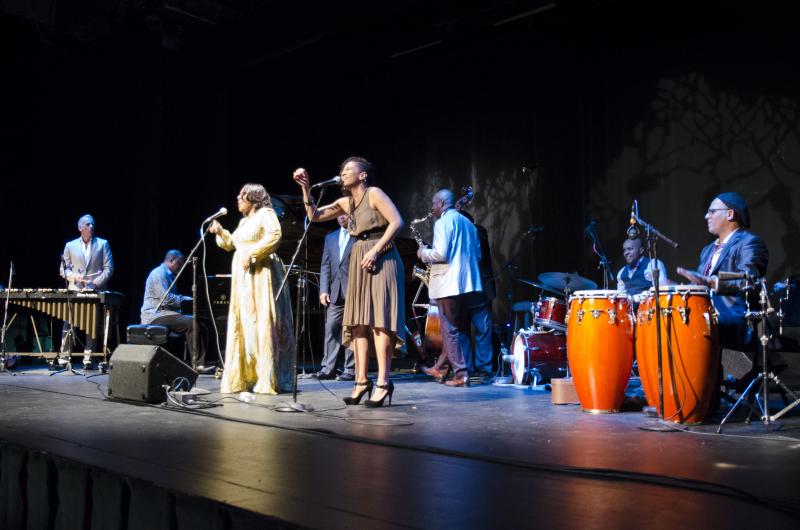 The old saying goes that we all die twice; once when we take our last breath and then a second time when our name isn't spoken anymore. It is highly unlikely that the name of Wesley "Skip" Norris will vanish from the tongues of jazz devotees anytime soon. Especially not after the memorable and extraordinary sendoff that took place last Friday evening in Detroit. An advocate for jazz in so many ways throughout the past decades, Norris fostered a strong presence for the music through his work at the Jazz Café, Jazz at the Centre, and many other presenting outlets in Detroit. Before his untimely death in January, Norris had recently taken the reigns as a skilled associate to Gail Boyd and her jazz booking organization.

During a beautiful memorial service in January at Norris' home church that featured Ralph Peterson, Victor Goines and Robert Hurst, the plans were put in place by both Boyd and Norris associate Andrew Rothman to organize a concert and benefit for Skip's teenage daughter. Against the odds presented by touring schedules and availabilities, some of Norris' closest musical artists and friends came together at the Northwest Community Center to honor his legacy and promote the cause.

WEMU jazz host Linda Yohn served as mistress of ceremonies and efficiently kept things flowing for the nearly two and a half hour concert that touched on many styles and flavors of jazz. Pianist Eric Reed opened the show with a pair of solo performances, the latter being a perceptive medley of the Beatles "Yesterday" and the jazz chestnut "Yesterdays." This was followed by a set of numbers by Nanny Assis, a native of Salvador, Bahia who manages to sing, play guitar, and dazzle with his percussion chops. Supported by Detroit luminaries Gary Schunk on piano, bassist Ralphe Armstrong, and drummer Bill Higgins, Assis cast a spell with his seductive bossa novas which even enticed Branford Marsalis to step out for a rare duet a la Getz and Gilberto.

A secret kept all too quiet, Chicago native Tammy McCann got to the heart of the matter with her deeply moving take on Ellington's "Come Sunday." Immediately after, she quipped that her Chicago lineage mandated some blues and she obliged with a flag waving performance of "All Blues," which featured Armstrong's bass histrionics using a bow. By that point, it was time for JD Allen to take the stage in a trio offering with just Armstrong and Higgins. Recalling the type of motivic development that Sonny Rollins has summoned in such a trio setting, Allen masterfully told his story with an up tempo piece and a ballad feature.

ADVERTISEMENT
Among Skip's most recent undertakings, he was often heard singing the praises of The Baylor Project featuring drum phenom Marcus Baylor and his vocalist wife Jean Baylor. Bringing Eric Reed back to the stage, the group's pair of contributions was highlighted by Jean's romantic and earthy take on the standard "Tenderly," which also found Marcus using mallets for a particularly musical solo statement of his own. The retrospective mood continued for a rapturous solo statement from Joe Locke's vibes and Victor Goines' clarinet on his own Brazilian-tinged "For the Beautiful Ones."

As the evening reached towards its conclusion, tenor saxophonist Branford Marsalis and pianist Joey Calderazzo offered due respect with a reading of Branford's "Eternal," a piece written for his wife back in 2004 and now dedicated to Norris' memory. With final words of gratitude and statements being said, all participants took the stage for a rousing jam on "There Will Never Be Another You." It was a fitting conclusion in many ways to a night honoring the legacy of a jazz warrior. Furthermore, it was a celebration of the communal bond that ties all of us who take this music to our hearts together as family.