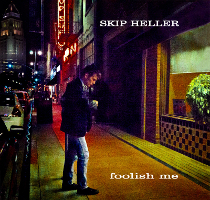 Fred "Skip" Heller is a hip musical polymath from Philadelphia, living on the West Coast, where he burns through musical styles like there is no definition. He has a major, and unapologetic, jones for John Hartford and Roger Miller and an encyclopedic knowledge of American music, of which he continues to be a student, teacher, shaman. Mention any name from anywhere in the history of New World music and Heller will have something to say about it. His personal discography reflects this similarly.

Musically, Heller may best be described as restless and searching. Straddling the fulcrum of this and the last century, Heller led an unconventional jazz organ trio that addressed a breadth of music spanning from Gustav Mahler to Thelonious Monk to Eddie Harris, releasing a summation in the fine It's Like That: The Organ Trio Anthology 1998-2004 (Jewbilee, 2004) that brought together the front end of his 20-plus year career.

Heller drove further into the heart of America with The Long Way Home (Ropadope, 2009), a jarring departure from the organ trio to the simple guitar trio and vocal music, all Heller originals and all steeped in that dry Bakersfield dust and sand. This was all Heller slow turning to face his musical icons, standing on the same ground as them. All of this as introduction to the further evolution of Skip Heller: Foolish Me. Like bringing lenses into focus, Heller pays tribute to great songwriting by writing some more of his own.

Writer Jana Pendragon calls Heller "this most baffling of country singers." While not totally inaccurate, such a clause fails to adequately represent Heller's journey to this point. Foolish Me is a slim seven-song CD, dense with Heller's musical ethos, that is fully informed by all his prior experience. The style he pursues is coming approximately into the Bakersfield, California orbit with Merle Haggard and Buck Owen's rhythms replete with Charlie McCoy-border guitar seasoned with piquant strains of Tex-Mex softened by the California Desert. The eclecticism Heller brings to this recording can be heard large in one of his favorite recordings, John Hartford's Aereo-plain (Rounder, 1971), whose careful eclecticism Heller shares.

The Heller original "The May I Used to Be" opens the disc as an interesting mixture of Roger Miller lyricism and Marty Robbin earthiness. The voice: that is Heller's own. It reveals more West than East coast. It is by no means a standard country voice. Taking the bull by the horns, Heller spins out a brisk Roger Miller-George Jones' "That's The Way I Feel" providing a perfectly precise acoustic guitar solo. Perhaps the best piece on the recording, "Let's Stay Home" is also the most troublesome for its sheer simplicity, requiring several listenings to reveal its charms. The most "jazzy" of the disc, "Let's Stay Home" is a blue-collar lament of lovers living in the heat of the Valley, wishing for bigger things but happy with what they have:

"We don't need our horoscope to tell us this could be the night to shut the blinds, dance close and slow to Elvis..."

"Accustomed to the Blues" and "Joe Turner Lane" possess more clever Heller lyrics as well as his unique approach to this western music. Closing the disc is the Waylon Jennings/Billy Joe Shaver lament "You Asked Me To." Heller gets the the biggest songwriting bang from the covers on this recording. "You Asked Me To" smacks true of Jennings' honky tonk rhythm. Heller softens this more to the sound he has been approaching for much of the last decade: American Music, American Style.

Tracks: The Man I Used To Be; That's the Way I Feel; Let's Stay Home; Accustomed to the Blues; Fools Like Me; Joe Turner Lane; You Asked Me To.