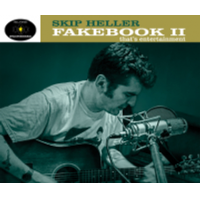 Fred Steven "Skip" Heller is one of those musicians with a gravity great enough to create his own universe. He is a multi-instrumentalist, composer, arranger, bandleader, producer and writer with an all-encompassing musical knowledge, interest and vision that is readily witnessed in his All About Jazz column Hardly Strictly Jazz. He is a stylistic moving target playing guitar- organ trio before moving on to Americana and ultimately to being what Jana Pendragon calls, "America's most confusing country singer." Whatever Heller might be, he is wholly dedicated to music, particularly American music, historically, conceptually and metaphysically. For Heller, music is a multidimensional entity with no bottom. It is all part of his universe and he wishes it to be part of your's.

Heller is the eldest child of three born to two Philadelphians. He had the good looks of a young Art Pepper crossed with Charlie Sheen and the mind and wit of Dr. Samuel Johnson. After becoming a fixture on the Philadelphia music scene, Heller followed his west-coast good looks to the West Coast where he has worked successfully as a producer and arranger and...yes, a musician, making his living in paradise. In 2004, Heller released what might be termed his "standards" recording Fakebook (Hyena Records). It was nominally a guitar- organ jazz trio supplemented with Robert Drasnin's fleet reeds. But if we were expecting "My Funny Valentine" and "The Way You Look Tonight" we were jarred out of our slumber with Big John Patton's "The Yodel" and Eddie Harris' "Cold Duck Time." Heller was not simply being provocative in assembling this recital, he always has a reason and a story behind every song he performs: his or others.

So, when Heller began dropping electronic hints here and there about a sequel to Fakebook one thing was certain: it would be interesting and mostly unpredictable, save for the roots music direction Heller has been heading in for the last number of years. The only thing that might be counted on is that a Roger Miller song might show up. Indeed, that is the case on Fakebook II—That's Entertainment, where Heller covers two Miller compositions. The first is "Invitation to the Blues," written for Ray Price and was the B-side to Price's 1958 Top 10 Country, 45-rpm single "City Lights." The second is "The Way I Feel," which Miller co-wrote with George Jones for Faron Young's Top 10 1958 Country single. Heller is a stickler for song sources, favoring Miller's late-1960s version of the song.

These two songs preview Heller's entire effort here by displaying his authenticity and musical pureness of heart. Heller honors the art of the songwriter with fearless sincerity. He effortlessly reaches back into the early part of the last century to bring forth gold pieces like the 1926 Billy Rose/Lee David composition, "Tonight You Belong To Me," on which he duets with his regular road partner Claire Costa. While charming, the song is not merely tomb robbery, it is an educational exposition of a period music performance presented as organically and genuinely as possible. Heller does the same with the quasi-mysterious 1920s staple "Sweet Sue," which is included on a companion 10-inch, 78-rpm disc (recorded live to mono). Authorship of this song is questionable, though it enjoyed an important performance in 1928 by Paul Whiteman Orchestra with coronetist Bix Beiderbecke as soloist.

Heller, ever the intrepid musicologist, nevertheless allows the music he performs to breath and have a unique, postmodern identity. He expresses his sense of humor with the inclusion of "Go East, Young Man," culled from Elvis Presley's movie Harum Scarum (MGM, 1965). He captures perfectly the Caribbean vamp of the period without ever straying into camp. Switching to The Andrew Sisters, circa WWII, he spins through "Azusa" as if he wrote it yesterday, infusing it with his gentle intelligence and keen sense of fun.

Fakebook II—That's Entertainment is very much like Shannon Whitworth and Barrett Smith's most excellent Bring It On Home (Self Produced, 2012). Both are spare on instrumentation, relying rather on the songwriting of the pieces presented. The diverge at the point where Heller's intense honesty becomes myth and these songs become part of us. And, after all, isn't that what music is all about?

Tracks: Tonight You Belong To Me; Deep Elm Blues; Go East, Young Man; True Love; Skip A Rope; The Way I Feel; Just Someone I Used to Know; That's Entertainment; Invitation to the Blues; Azusa.