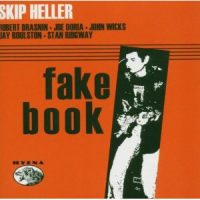 Ever since I heard of Career Suicide and Homegoing , I have enthusiastically anticipated the next Skip Heller release. In 2003, Mr. Heller continued his organ trio investigations that began with Homegoing with the well-received live recording Battle in Seattle , where he hooked up with his current rhythm section of organist Joe Doria and drummer John Wicks, AKA Dose. Following that mini-tour of the Northwest, Heller entered the studio and cut nine of the eleven pieces found on Fakebook , with the remaining two pieces captured live from the tour. Joining Mr. Heller are elder statesman Robert Drasnin on reeds and flute (a regular member of Heller's quartet) and Jay Roulston on trumpet and Stan Ridgeway on vocals and harmonica on a live rustic "The Man in Me."

So many writers have described Skip Heller's musical inclinations as "eclectic" as to render that word useless and cliche The word "eclectic" is much too dilettante to describe the muse driving Mr. Heller. For that matter, Mr. Heller's eclecticness far transcends mere music, encompassing, and nay, consuming all of culture. And this culturally omnivorous vision is distilled back into his music. No, Skip Heller is not cliche In fact, his answer to those musician's complaining about playing the same tired standards all of the time is? to make some new ones ...there is plenty of material out there.

And that is exactly what Mr. Heller does. He chooses favorite songs of his youth, some obscure, some well known, but always songs meaningful to him. He then frames these songs in such a way that it seems inappropriate to apply such inadequate labels as Jazz or Rhythm & Blues to them. Fakebook runs the compositional gambit from Ellington to Prince, Monk to Dylan, Eddie Harris to Bugs Bunny (Raymond Scott). Mr. Heller arranges and performs this music with a reverent sense of humor that enables the music to breath and reveal new delights to old and new ears.

The disc opens with Big John Patton's "The Yodel." The original featured (and was co-composed by) Grant Green on guitar. Mr. Heller revealed that he wanted to do a Grant Green song but not one well known so the listener would spend time with his interpretation without occupying themselves with Heller?s versus Green?s solos. The result is an exciting cut that begins like a methamphetamine-addled Klezmer band and evens out into a relentless groove. Featured are Heller, Drasnin on a very cool clarinet, trumpeter Jay Roulston and organist Joe Doria. In a short few minutes, Heller and company expel one of the most intelligently conceived and executed bits of coherent funk as a perfectly formed, discreet piece of music. Les Baxter's "Sophisticated Savage" was the result of Heller's close friendship with the composer and Heller's keen ear for novel chord progressions. It is given an almost light Bossa treatment, which imparts an airy, ethereal feel, with just a hint of danger.

Perhaps the most entertaining cut on a disc full of them is the Gloria Gaynor anthem "Never Can Say Goodbye." Featured live on Battle in Seattle , this song has some of Mr. Heller's most precise and inspired guitar playing. The song translated well from the bandstand to the studio and graces this collection with its pop sensibility transformed into something greater. Jerry Goldsmith's theme to the movie Chinatown provides Robert Drasnin a vehicle to show off his exquisite alto prowess. A beautiful ballad, Mr. Heller's guitar provides just the elements of surprise and completeness.

Mr. Heller casts Prince's "Sometimes it Snows in April" as a Jazz Crusader's-tinged, sanctified Gospel-R&B- Contemporary Jazz tome (that this music is so hard to describe with anything other than anemic platitudes is a tribute to its artistic value). Joe Doria provides an orchestral support and Richard "Groove" Holmes solo, propelled along by Heller's go-for-broke support. Perfectly paced, "Sometimes it Snows in April" illustrates Heller?s sensitive understanding of arrangement dynamics.

Skip Heller is something special. Few musicians have as naked a dedication to making music with the listener in mind. Mr. Heller intelligently chooses the songs to cover, never opting for the arcane or esoteric and he plays those songs with grace and love. Let us hope that his relationship with Hyena Records, a perfect label for him, is long and fruitful, because music like this should be shared and shared widely.