By C. MICHAEL BAILEY
September 28, 2015
Sign in to view read count
Fred "Skip" Heller. Now there is a rara avis. A musical omnivore as drawn to Glenn Gould as to Roger Miller, Heller's talent and dedication to music and its history deserves so much more than local notoriety in the Los Angeles and Philadelphia areas it enjoys. Then, if I were LA, I would not share him either...he is that special of a person and musician.

Heller's personal sound has matured and quickened over his most recent releases, reprised on his present compilation, San Fernando Valley Blues 2008—2012). What may be Heller's most stable approach manifests on the fully realized the Hollywood Blues Destroyers: Here in California. I would not be so presumptive or naïve to believe that Heller won't change directions again, but he has found a very comfortable place. 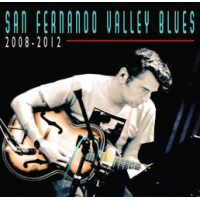 San Fernando Valley Blues 2008-2012 includes selections from The Long Way Home (Tallulah Records, 2009), Jim Cavender's A Cellarful of Noise (Startlingly Fresh, 2010), Foolish Me (Weatherbird, 2012) and Fakebook II -That's Entertainment. These releases represent Heller in formative mode as he approaches the releases of . His songwriting is becoming more refined and lyrically sophisticated as evidenced by "I Used to Love California" and "The Man I Used to Be." Heller's lyric subjects are West Coast and on the downward trajectory.

His sense of humor and affinity for the music of the 1920s and '30s is presented on the clever shuffle "Joe Turner Lane" and the inventive "Duke Ellington's Tears." "I Hate You" is a sharp bit of Country Western shuffle musically and lyrically. "To Hot to Sleep" and "San Fernando Blues" are conversational with the latter erring on the side of rock-a-billy by way of Bakersfield. Heller's guitar playing remains as tasteful and precise as we have come to expect. San Fernando Valley Blues 2008-2012 is a suitable introduction to Skip Heller as he solidifies his vocal and songwriting chops. 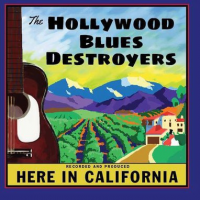 Skip Heller's Hollywood Blues Destroyers is the project that grew out of his superb Songs With Memories: Skip Heller And Friends Play Floyd Tillman (Weatherbird, 2013). Heller has always been the keeper of the flame when it comes to Americana and this recording was he most focused and cogent recording to date. Then Heller decided to take full control, inventing his new project and fixing his position as a smart and inventive composer with the release of The Hollywood Blues Destroyers: Singles Drinking Doubles (Self Produced, 2015). The year is not yet out and Heller provides us Here in California.

Here in California finds Heller's vocals nearly fully developed. Heller sings with a confidence only hinted at on his most recent recordings. The same can be said for his arranging capabilities, which have always been beyond question. With the Hollywood Blues Destroyers, Heller steers a "little big band" with happ care and grace. His songwriting contains in the same vein as Singles Drinking Doubles: sardonic songs about the grind ("Here in California") and self-effacing ballads ("If I Make it to Heaven" and "Waltz for Two Who Don't Dance." On the latter, vocalist Lisa Jenio shares a duet with Heller sounding like the Carter Family relocated West. Whether this is where Heller's journey deposits him for any length of time, it is a fine and happy place that is both tuneful and thought provoking.